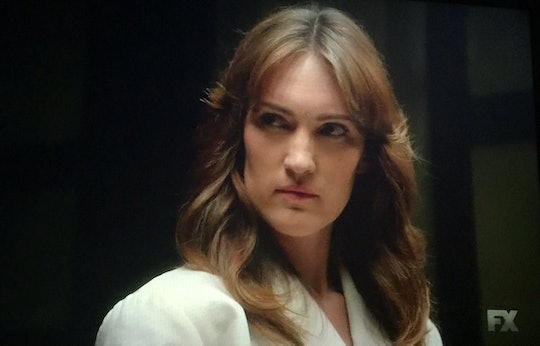 Who Are The Nurses On 'AHS: My Roanoke Nightmare'? They're Seriously Terrifying

The sixth season of American Horror Story was shrouded in mystery for the many months before it premiered. When the the Roanoke-themed season premiered on September 14, we were looking forward to getting at least a little bit of clarity on what the season is all about – but that didn't quite happen. The first two episodes have been incredibly vague, with mostly enigmatic, undefined threats coming after the lead characters Shelby and Matt Miller. We finally got our first solid antagonists – a pair of sinister nurses. But who are the nurses on AHS: My Roanoke Nightmare?

Nurse Bridget (played by Kristen Rakes) and Nurse Miranda (played by Maya Berko) were introduced during the second episode of the season, "Chapter 2." Matt, after spending the first episode and a half believing that his wife Shelby was seeing things, had a ghostly encounter of his own – he spotted the two women, dressed in traditional nurses' outfits, taunting an elderly, infirm woman named Margaret as she lay in a hospital bed begging for help. Instead of assisting Margaret, the two women told her that she'd been "warned" already and then shot her in the head with absolutely no hesitation. One of the two spray painted an "M" for Margaret on the wall. Freaky. It was a dark, very disturbing moment – par for the course for AHS.

But then, it somehow got so much worse.

Matt's encounter was spooky, but it got downright terrifying after he fetched the cop watching over their house and the cop found absolutely no evidence of what Matt had reported seeing. Matt briefly thought that he'd suffered a brain injury that was causing hallucinations, as a result of his attack back in Los Angeles before the move, but he and Shelby found chilling proof that the nurses he's seen weren't exactly of this world.

While Matt's sister Lee was encountering all manner of bizarre apparitions inside the house, Matt and Shelby were lured outside and into an underground cellar on their property by the sight of a little girl dressed in colonial clothing. In the cellar, they found a video camera and the taped "last confession" of Dr. Elias Cunningham (played by Denis O'Hare).

In his confession dated October 11, 1997, Dr. Cunningham, a professor who came to the house to research his novel, explained to his future viewers that there was something sinister in the house and that, as a result, he'd been living in the cellar. More importantly, he related the story of the two crazypants nurses who had inhabited the house before him. Their names were Bridget and Miranda, and they were basically the most terrible nurses that you could possibly imagine.

Dr. Cunningham explained that the two women had been nurses and had gotten away with killing an elderly patient shortly before leaving their last job. They purchased the house that Shelby and Matt now occupy, turning it into an elder care facility – with the sole intention of using it to murder their patients for fun.

One by one, Bridget and Miranda killed their patients in a very specific order, using the first letters of the patients' first names to spell out their favorite word – "Murder" – on a wall in the house. I guess that's one unique decor option.

Unfortunately for Bridget and Miranda (but fortunately for anyone else who was thinking of checking their elderly relatives into that particular facility), they mysteriously vanished before they were able to get to the last letter "R." Only "Murde" was spray painted on the wall in the house. The police thought the murderers had absconded and gotten away with it, leaving a trail of murdered elderly patients behind at the house, but Dr. Cunningham believed differently. Specifically, he thought the two had been stopped by some kind of supernatural force.

Super weird, right? Also, there are so many callbacks to Season 1's "Murder House" setting now, which also featured ghost nurses (albeit ones who were murdered and weren't murderers themselves).

There is still so much that needs to be explained about this season – like what, exactly, happened to the murderous nurses, why they were stopped, and what is causing their spirits to remain trapped in the house.