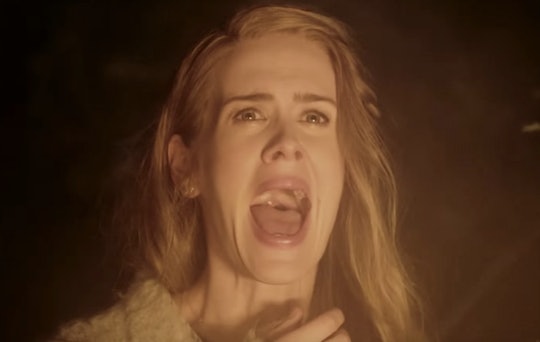 Who Are The Pig Boys On 'AHS: Roanoke'? Twitter Was Shocked & Disgusted By The Reveal

We still have little to no idea what's going on with the most recent season of everybody's favorite nightmare-inducing anthology series, American Horror Story: Roanoke. But one thing is definitely for sure: the writers are going all out on visceral, gag-worthy scares. Pigs have been a recurring motif throughout the past three episodes, but now the pig theme has reached a horrifying climax. Shelby, Matt, and Lee's discovery of feral boys in an abandoned barn has us all wondering one simple question: Who are the pig boys of American Horror Story: Roanoke?

Let's back up a little bit: In tonight's episode of American Horror Story, the Miller family searched for Flora in the aftermath of her mysterious and sudden disappearance. The search was to little avail – Flora was completely gone, save the little yellow sweatshirt found at the top of an impossibly tall and barren tree in the woods. Instead of finding Flora, her mother, aunt, and uncle stumbled upon an abandoned farmhouse and barn, discovering something else entirely – two feral young boys, covered in dirt, suckling from a dead pig.

One more time, for emphasis: FERAL BOYS. SUCKLING. FROM A DEAD PIG.

Twitter had some pretty *strong* thoughts about the shocking reveal (to put it mildly) – mostly in the form of shock, disgust, and "WTFs."

And, of course, many AHS fans expressed their grossed-out reactions to the unsavory reveal in the best way they knew how – with hilariously apt GIFs.

After the feral kids were introduced and removed from the barn by the police, they disappeared entirely from the episode – we learned little else about them (for now, anyway). The cops deduced that the boys had been left behind by the Polk family (the "hillbillies" who attempted to outbid the Millers for the Roanoke house), who seemingly up and left the boys and their house behind much earlier.

But we were left with one hint that the feral pig boys are actively related to the larger "Roanoke" mystery. While in custody, they kept repeating one word, which definitely sounded like "Croatoan."

If that word sounds familiar, it's because we heard about it way back in American Horror Story: Murder House, when psychic Billie Dean was explaining that the word was used to banish evil spirits in the Roanoke colony, hundreds of years earlier. Later in this very episode, the newly introduced psychic Cricket, who shows up to help the family find Flora, shouted the same word to get the ghost of The Butcher to leave the Millers' house.

Things are slowly but surely coming together, illuminating the "Roanoke" mystery.