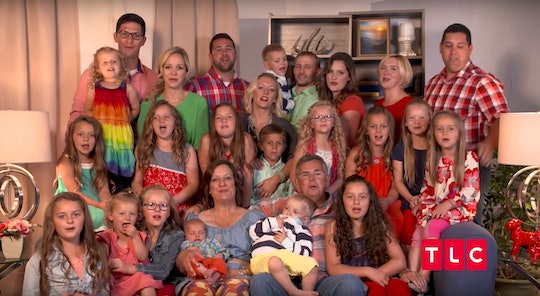 Here's What You Need To Know About The Putmans, TLC's Newest Family

Imagine sharing two bathrooms with 25 of your closest family members. Sounds like a pretty brutal situation when, say, everyone travels home for Thanksgiving and temporarily stays together under one roof, right? Now, imagine actually living this way 24/7. Well, that's the case for TLC's new reality star family. And their new show, Meet the Putmans, has viewers wondering who exactly the Putmans are, and what the heck possessed them to adopt such a crowded living arrangement. According to the network's website, they are "[t]hree Generations, 10 adults, 15 kids; 25 people. ALL living under one roof, sharing everything." And since the pilot aired, a new baby brought the total number of Putmans up to 26, a fairly mind-boggling person count for one house.

Meet the Putmans aired Sept. 11 and introduced the world to its own take on the gargantuan reality TV family á la the Duggars and even the OutDaughtered crew, which features a herd of all-girl quintuplets. But even the Duggars' 19 kids are all part of one nuclear family, while the Putmans' combined 16 children live together with their grandparents and respective parents simply because the family decided that's how they like it.

The breakdown goes like this, The Hollywood Gossip reported: Bill and Barb Putman have four adult children. Billy, Brandon, Blake, and Blair all have spouses and kids of their own. The result? Twenty-six people living together throughout Season 1 in a 6,250-square-foot Michigan home with two bathrooms, eating massive family dinners every evening at 6 p.m. sharp.

According to MLive, Meet the Putmans piloted on TLC in January before getting picked up for a cable run. The focus of the freshman season of their reality show will focus on their journey to build a much more spacious 34,000-square-foot Michigan crib together.

Throughout Season 1, though, things are tight in the house pre-move. In order to make a household with 10 adults and 16 young children run as smoothly as possible, the family has some hacks: They own their own minibus to get around, as well as two dishwashers, two stovetops, and a double oven. And on what they've dubbed "Super Tuesdays," all the adults get together to make important family decisions that affect everyone. And if anyone knows how to wrangle 26 individuals into a functioning household, it's the Putmans. They've been living this way as the family continues to get bigger and bigger and bigger and bigger for more than a decade, since 2006.

Other little tidbits that illustrate the family's almost supernatural closeness? With the exception of one son, Blake, and one son-in-law, Jamie (both of whom are doctors), the entire family works together at Putman Development and Demolition. You guessed it: That's the family business. And they have a creative (if incredibly unconventional) solution to the money issues that would inevitable plague a household with so many people: They all share one (one!!!) bank account.

For many, the Putman family's living arrangements are totally unfathomable, which is probably why it makes for such compelling TV. All signs indicate that they mostly do enjoy this extreme take on communal living. That's definitely the case for family patriarch Bill Putman, who described his feelings about it to The Huron Daily Tribune in the most glowing of terms:

When the family's all home, I'm at my best. I feel like I'm in heaven. I'm enjoying life to its absolute fullest.

But even though oldest son Billy Putman subsequently told MLive that the vote to continue living together was a "unanimous" yes, it wasn't working for everyone. After the pilot aired, his sister, Blair, her husband, Jamie, and their kids moved out so that Jamie could be closer to work, according to MLive.

Still, that's all part of the growing pains that will undoubtedly keep fans watching.