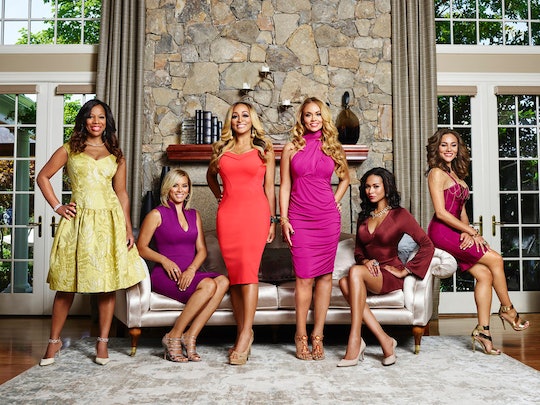 Who Are The ‘Real Housewives Of Potomac’? Bravo Promises Its Newest Cast Will Deliver All The Drama

Throw all the wine and turn over all the tables! A new Housewives series is coming in January, guys — and so far, it looks like it's gonna be good. This week, Bravo announced The Real Housewives of Potomac, one of two new series in its wildly popular Housewives franchise. In a post on Bravo.com, the network announced that the new series will show viewers what it’s like on the inside of the well-heeled Washington DC suburb of Potomac, Maryland, billed as one of the “nice little secrets” of the capital region. The Real Housewives of Potomac will feature a crew of six wealthy black women from the town’s tight-knit social scene: Gizelle Bryant, ex-wife of megachurch pastor Jamal Bryant; international model and TV personality Katie Rost, socialites Karen Huger and Charrisse Jackson-Jordan; publicist and single mom Robyn Dixon; and restaurateur Ashley Darby.

And if the trailer is any indication, the show will deliver all the drama of the popular Atlanta and New York shows, but with more… etiquette? Seriously, the castmembers use the word no fewer than five times in this clip introducing the show. Apparently, it isn’t enough to have money in Potomac, you have to know how to play by the rules. Says castmember Karen Huger in the promo, “If you don't behave yourself in Potomac, you might be asked to leave.”

This isn’t the first time that Bravo has taken its signature franchise to the nation’s capital. Do you remember Real Housewives of DC? If not, you didn’t miss much. The short-lived series was supposed to showcase DC’s most politically powerful socialites. But instead, viewers got to meet Tariq and Michaela Selahi, the social climbers best known for gate-crashing a White House state dinner.

According to Bravo.com, The Real Housewives of Potomac will focus on wealthy African Americans who have “broken racial barriers” to live in the posh suburb just north of the nation’s capital. Montgomery County, where Potomac is located, is one of the richest counties in the U.S. with an average income of $178,000. Bravo.com describes the community as “a cozy, upscale enclave with gated mansions, rolling hills, and exclusive country clubs.” In 2013, CNNMoney.com named Potomac the most affluent town in America.

As for the ladies of the Potomac, they're looking pretty fierce — and I can't wait to see all the drama they bring come January.

Mark your Google calendar — The Real Housewives of Potomac will premiere on Sunday, January 17.