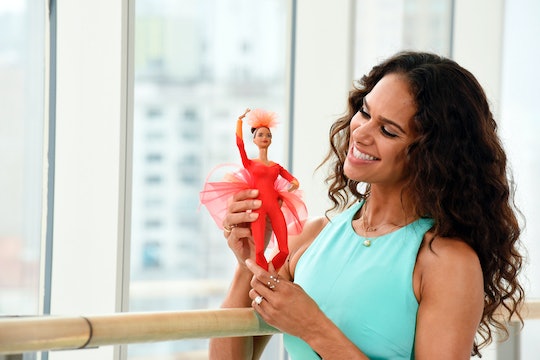 Who Are The 'Shero' Barbies? These Dolls Honor Some Amazing Women

On Monday, U.S. Olympic gymnast Gabby Douglas received an honor almost as prestigious as her two gold medals from the 2012 London Games — Douglas was immortalized with her very own Barbie doll. But Douglas's likeness isn't just any ordinary Barbie doll: her's is one of a select group of Barbie dolls known as "Shero" Barbies. So who are the Shero Barbies? They include an impressive line up of women from a variety of backgrounds and becoming a Shero Barbie means you're a woman of a very select few to hold the honor.

The latest iteration of the Shero Barbie featuring Douglas ties into a larger campaign from Mattel, the makers of the Barbie doll, called the You Can Be Anything campaign. The campaign was launched in October of last year and was organized in an effort to allow young girls to imagine themselves in whatever professional capacity they want to be when they grow up, from gymnast to film director to Barbie's first all-female presidential ticket.

The first Shero Barbies included six women who are, according to a statement from Mattel, "female heroes who inspire girls by breaking boundaries and expanding possibilities for women everywhere." The first six Shero Barbies were introduced in tandem with the 2015 Variety Power of Women Luncheon.

Here's a look at each seriously rad Shero Barbie.

Ava DuVernay, The Director Of Selma

Initially, Mattel introduced its Shero Barbies as one-of-a-kind runs, with a single doll made in each woman's honor to be auctioned off to a charity of their likeness's choosing. However, fans of Selma director Ava DuVernay were so eager to have one of their own, Mattel actually released a limited number of DuVernay Shero Barbie dolls for sale — and DuVernay's Barbie sold out in just minutes as soon as it was available for purchase online.

Rossum was honored for her work as a Golden Globe nominated actress, singer, and spokesperson for Best Friends Animal Society.

Sydney "Mayhem" Keiser has already made quite the name for herself — and she's barely tall enough to ride most rides. This 5-year-old fashion wonder has already designed clothing that's appeared in both Vogue and J. Crew. I have not nearly done enough with my life and I'm almost seven times older than she is.

The Shero Barbie honor is not about the fact that Eva Chen was the Editor-in-Chief for Lucky magazine — it's that she was the youngest appointed female editor-in-chief for a national fashion magazine, taking on the head role at just 33 years old. Chen left Lucky in 2015 and became Instagram's Head of Fashion Partnerships.

Trisha Yearwood has a lot to be celebrated for with a Shero Barbie: She's won multiple Country Music Awards and has her own cooking show, Trisha’s Southern Kitchen, on the Food Network, along with two best-selling cookbooks.

America's ballerina Misty Copeland became the first Shero Barbie of 2016 when the 33-year-old dancer was honored with a Barbie in her likeness in May. Copeland's Shero Barbie is one of only two Shero Barbies that have been on sale to the public. You can get your very own Misty Copeland Barbie doll on Amazon.