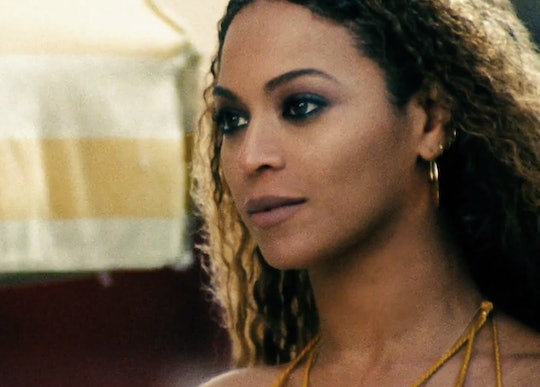 Who Are The "Side Chicks" In Beyonce's 'Lemonade?' The Beyhive Is On Watch

We adore her. We revel in her every triumph. We're constantly analyzing her. And now, everyone wants to know who are the "side chicks" are in Beyoncé's Lemonade musical short — for good reason. Most importantly, perhaps, we want to understand Beyoncé as an artist, and we never, ever know what to expect from her.

Although she's undoubtedly the most influential and iconic superstar of a generation — not to mention a shaper of our very lexicon, inserting signature words like "Bootylicious," "flawless," and "slay" into everyday language — Beyoncé also boasts one of the most tightly controlled images of any celebrity. That's why so many fans and social commentators were shocked (and delighted) when her mysterious but fervently anticipated HBO event, Lemonade, turned out to be (in addition to an exquisite work of art in the form of a visual album-film-monologue hybrid) an apparent condemnation of her probably-cheating husband, Jay Z.

It was a stunning revelation about the personal life of a woman who has schooled the industry at manipulating the media while remaining aloof and untouchable. So we may now have some clarity, but we now have an entire new set of questions, the most pressing of which being inquiries about those mysterious "side chicks" that Beyoncé refers to again and again, throughout Lemonade.

Throughout the hour-long special, Beyoncé had the internet all but convinced that the entire project was an announcement she'd divorce Jay, speculating over her dropped clues, imagery, and lyrics. (She'd still be the greatest of all time either way, whether she had a ring on it or not, of course.)

Consider a small sampling of spoken-word statements and lyrics from the 12-track masterpiece: "... but still inside me, coiled deep, was the need to know... are you cheating on me?" ("Denial"); "Ashes to ashes, dust to side chicks" ("Apathy"); and, the one the internet seems to be freaking out the most over, "He better call Becky with the good hair" ("Sorry").

This reference to the clearly problematic "Becky" may be the best clue we have as to the identity of one of Mr. Carter's alleged "side chicks." In May 2014, security footage showed the world what seemed to be proof of waves in the facade of the Carter-Knowles union: Beyoncé's sister, Solange, physically lashing out at Jay Z in an elevator as Bey passively watched. At the time, rumors circulated that Jay Z's relationship with fashion designer Rachel Roy was the impetus for the incident.

Roy reportedly captioned the now-private photo of herself and another woman,

Good hair don't care, but we will take good lighting, for selfies, or self-truths, always. live in the light #nodramaqueens.

Tabloids have long alleged that Jay Z's supposed mistresses ranged from Rita Ora to Rihanna. Last year, the New York Daily News even reported that the rapper was facing a paternity suit from a 21-year-old man claiming to be his son. The man's conception would have predated Jay's relationship with Beyoncé, but still, not a great look.

Although it looked as though a Beyoncé-Jay Z breakup was on the horizon last night, Lemonade later tracks did feature happy clips from the couple's wedding and an appropriately contrite-seeming Jay Z pretty much kissing his wife's feet.

It seems as though love has prevailed, especially because the full album is available exclusively on Tidal, Jay Z's streaming service. But we never know what Bey might do, so side chicks, beware.