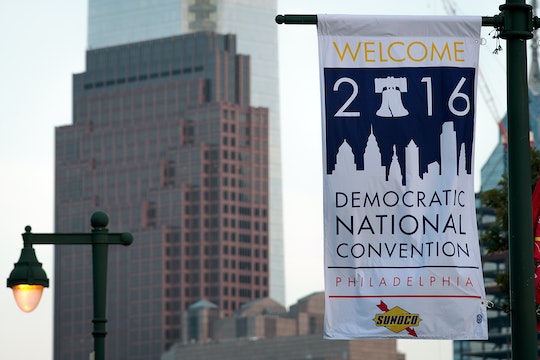 Who Are The Speakers At The DNC? The Democrats Are Bringing Their A-Game

After a national convention that included plagiarism allegations against the possible future First Lady, a lack of endorsement from the primary race runner-up, and a leaked speech by the actual nominee, the Republicans' time in the spotlight is over. Next up is the Democratic National Convention, which will have Democrats from around the country flocking to Philadelphia for the political event of the (election) season. Other than the clear differences in politics and ideology, the DNC will differ from the Republican National Convention in one specific way: most of the 2016 DNC speakers are top political players in the Democratic Party.

It's a distinction that the Democratic Party has been keen to point out after the RNC featured as many Trumps, television actors, and billionaires as it did Republican governors and senators. As the Democratic Party wrote in an article on Medium announcing its headlining speakers:

While Republican leadership continues to run away from Donald Trump, and refuse to participate in the upcoming Republican convention, the Democratic convention will showcase enormously popular national leaders, rising stars from across the country and a diverse range of everyday Americans who will inspire the nation.

So who, exactly, are these national leaders, rising stars, and everyday Americans speaking at the Democratic National Convention this year? Let's break down the known speakers who will be taking the stage during the four-day event.

On the first night of the convention, First Lady Michelle Obama will take the stage along with Vermont Sen. Bernie Sanders and Astrid Silva, an undocumented immigrant and immigration reform advocate. It seems like the DNC is starting off on a strong note and differentiating itself from Trump's anti-immigration stance right off the bat.

The second Democratic convention night is all about Clinton — although Hillary herself won't be speaking yet. On Tuesday, Democratic delegates will make their Clinton choice official, and her husband (and former president) Bill Clinton will step up to the mic to sing her praises.

Also scheduled to take the stage on Tuesday are several "Mothers of the Movement" — women who have lost their black sons to police violence, including the mothers of Eric Garner, Trayvon Martin, Michael Brown, Sandra Bland, and more. The Philadelphia Police Union made it clear that they weren't exactly thrilled with the DNC's decision to feature Mothers of the Movement. A former Philadelphia police commissioner is also scheduled to speak on Tuesday night about police violence and the recent shooting of officers by civilians.

On Wednesday, the DNC will welcome the country's top two current leaders — President Barack Obama and Vice President Joe Biden. Both men have already endorsed Clinton. According to Mic, the DNCC said that, at the DNC, Biden and Obama will "take an in-depth look at just how high the stakes are in this election and how Hillary has the experience and steadiness to bring people together to tackle the big challenges and get real results."

As usual, the DNC is going out with a bang. On Thursday, Hillary Clinton will formally accept the nomination and address the convention crowds. She'll also be joined on stage by her daughter, Chelsea Clinton, and the race of Trump vs. Clinton will officially be on.

The DNC hasn't revealed all the goods yet. On Thursday, the DNC announced more speakers, but didn't reveal exactly when they'll be speaking, so you'll have to stay tuned. However, if you do keep up with the convention, you can expect to hear speeches from plenty of well-known mayors, senators, and members of Congress, including Sen. Elizabeth Warren, former Gov. Martin O’Malley, Sen. Tim Kaine, Sen. Amy Klobuchar, and Mayor Bill de Blasio.

More Like This
Kourtney Kardashian & Travis Barker’s Kids Had Roles In Their Wedding
Kate Middleton Explains Why Her Kids Couldn't Attend The Top Gun: Maverick Premiere
Prince Harry & Meghan Markle Could Take Us Inside Their Home For A New Docuseries
Jennifer Lawrence Just Kinda, Sorta Revealed The Sex Of Her First Baby