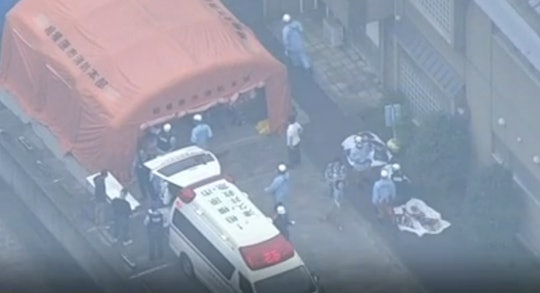 Who Are The Tokyo Stabbing Victims? It Is Important To Honor Them

It has been a violent, horror-filled summer so far, and it just got worse. A man wielding a knife killed at least 19 people and wounded dozens more at a facility for disabled people in a suburb outside of Tokyo. Who are the Tokyo stabbing victims? It seems that the attacker may have known some of them, since reports indicate that he was a former employee at the facility.

The attack occurred in Sagamihara, a suburb about an hour from Tokyo. The attacker, a man reportedly in his 20s, broke into the facility, which is called Tsukui Yamayuri-en, at 2:30 a.m. local time on Tuesday. He turned himself into the police after his killing spree and confessed that he used to work there, according to NHK, Japan's national broadcaster.

While the names of the victims have not yet been released, it seems that, given the hour, that they were mostly patients at the facility. That means that, horrifically enough, the attacker likely used to care for some of them, or at least see them, depending on his role at Tsukui Yamayuri-en. According to The Washington Post, the facility provides both live-in and day care accommodations, and serves people with a wide range of disabilities, including those who are bed-ridden.

As information continues to trickle in, and the names of the victims are released, it will be important to honor them, rather than letting the curiosity about the attacker and his motives overshadow the individual lives of the victims. With any sort of mass killing, the media tends to disproportionately cover the killer, perhaps because there is only one, whereas thinking about the victims can be overwhelming and numbing, particularly as the death count climbs. It's a harmful imbalance, and one that can end up motivating even more killers driven by the promise of infamy.

And honoring the victims will be especially important in this case. A recent article in The Independent pointed out that society often doesn't seem to care as much about a crime when it's directed at a disabled person. According to the Bureau of Justice Statistics, in 2012 in the United States, the rate of violent victimization against the disabled population was three times as high as the rate against the non-disabled population.

If the attacker wanted to make his victims "disappear," we must ensure that they don't by honoring their memories, and sending our condolences to the families that are mourning them.