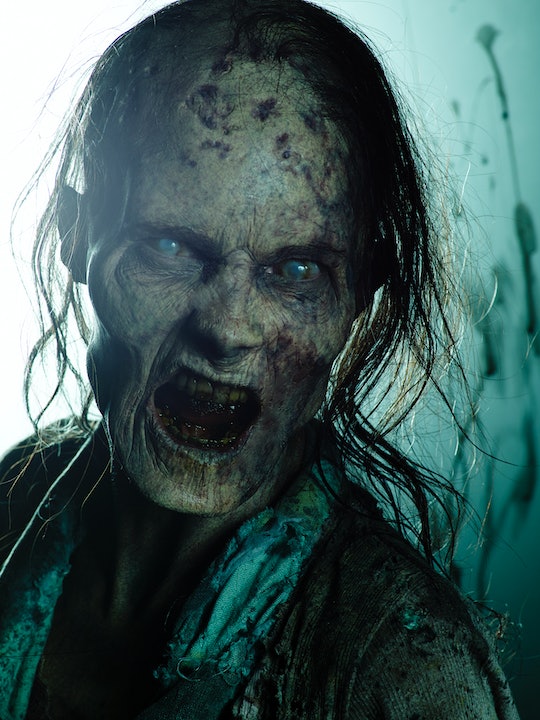 Who Are The Whisperers On 'The Walking Dead'? The Person Spying On Alexandria May Be One

The midseason finale of The Walking Dead, "Hearts Still Beating," didn't dissolve the season's main threat, instead allowing Negan's oppressive rule to stretch out a little longer — but it might have introduced a brand new one. The episode may have closed on a hopeful note, but the presence of a mysterious stalker following the Alexandrians around could quash that hope as soon as the show returns. The spy's only defining feature was a pair of boots and while that revealed next to nothing, some fans are already guessing that this person may be from the group currently terrorizing everyone in The Walking Dead comics: the Whisperers. But who are the Whisperers on The Walking Dead?

The Whisperers are yet another group of survivors who have found a less than pleasant way of surviving in the world of walkers. They disguise themselves as the dead by wearing zombie skin fresh off the runway, mimicking the zombie's slow ambling walk, and not speaking above a whisper so they don't draw attention to themselves. Their society is pack-based and territorial, run by a callous woman only referred to as Alpha, and they respect strength above all else. When some of the Alexandrians impede on their land in the comics, the Whisperers behead them and impale their heads on spikes. The Whisperers are not playing around.

But what are the odds that the new spy is actually a Whisperer? While technically there's not enough evidence to dispute that they could be one, there's also not really enough evidence to support the theory either. This person was alone, which is unusual for the Whisperers, but then again the spy could have been a scout getting the lay of the land. This individual also didn't appear to be coated in zombie innards, but all that viscera could have been lurking just off camera; viewers only saw the spy's feet, after all. It would also be very early for the Whisperers to make an appearance, because they don't show up in the comics until two years after Negan is defeated.

There isn't enough information available yet to know for sure if the Whisperers have made their first appearance on The Walking Dead, but whoever that boot belongs to, odds are they're going to cause trouble. That's how things work on this show.