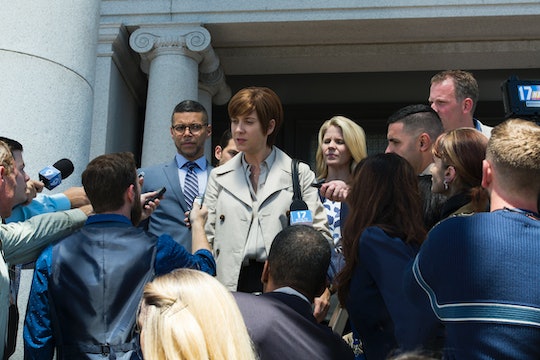 Warning: spoilers ahead for Season 2, Episode 2! In the second episode of 13 Reasons Why Season 2, Clay made an attempt to get to the bottom of the mystery Polaroid he received in Episode 1. After quickly deducing that the school photographer Tyler was too pretentious for Polaroids, he asked if Tyler knew who the people in the picture were. Tyler identified them as Tommy Schuster and Erica Charles. But the audience has never met either of those students, leaving many wondering: who are Tommy Schuster and Eric Charles on 13 Reasons Why, and why are they important to the story?

Luckily, Tyler had a few more tidbits of information, though it still wasn't much to go off of. Tommy was a baseball player, which was clear from his outfit in the picture. Both Tommy and Erica were a few years older than the current crop of main characters, too; they were seniors when Clay and company were freshman. That means they probably didn't even know Clay or Hannah, making their connection to the present storyline somewhat unclear. What significance could two teenagers who likely never met the protagonists have on what's going on right now in the show? Erica and Tommy had long since graduated, too, making it even less obvious why Clay would be handed a picture of the two of them.

Hannah and Jessica were both raped by Bryce before the events of Season 1, but it seems like Season 2 is trying to say that neither were isolated incidents. The increased presence of the jocks indicates that the season might try to explore the culture of entitlement and assault among the athletes at Liberty High. In Episode 1, guidance counselor Mr. Porter was on hand to help while the baseball coach gave the entire team a talk about consent. None of the boys seemed to take it seriously and instead cracked jokes. In the next episode, Mr. Porter spoke to the coach about keeping his team's behavior in line, especially when it came to the bullying they engaged in.

Viewers have also seen how Bryce rewrote the story of what happened with Jessica, claiming their encounter was consensual and she only said it was rape because she felt guilty about "cheating" on her boyfriend Justin. Everyone believed him instead of her, despite knowing Hannah's story. If Season 2 plans to delve deeper into how the jocks at Liberty are so glorified that they get away with anything, then it might have to show how long that dynamic has been in place. That could be how Tommy and Erica fit in.

It's impossible to say based on the very limited information available, but the Polaroid's caption could have been alluding to another instance in which a baseball player at Liberty assaulted a girl. It might have been so common that Bryce wasn't the only one committing the assaults; perhaps multiple members of the team were, Tommy Shuster included. That lends credence to the Bakers' case that the administration at the school wasn't intervening when they should have in prior situations.

But that's only speculation. Until 13 Reasons Why reveals more, viewers can only theorize about what part Tommy and Erica will play in the story.