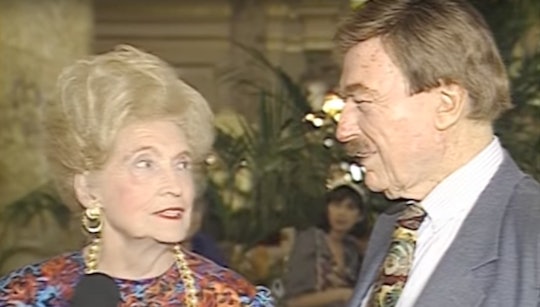 Trump's Parents' History Can Tell Us A Lot About Him

Donald Trump is perhaps the most polarizing, and definitely the least popular, president of all time. Many Americans are disgusted by his xenophobia, misogyny, perceived lack of political acumen and understanding of policy; others admire his business background and blunt manner of speech. But it's hard to deny that his family means a great deal to him, as his three oldest adult children have been called his best political assets. But Donald Jr., Ivanka, and Eric are part of the family Trump made. What about the one he comes from? Anyone trying to understand that bombastic man in the White House would do well to consider who Trump's parents are.

Although much of the discussion about Trump's original family centers around his father, the real estate tycoon Fred Trump, aspects of his mother's story are striking, too. Mary Anne McLeod headed to the United States from her native Scotland in 1929, making her, yes, an immigrant, according to a New Yorker profile of her. Trump, of course, has railed against immigrants as well as refugees both as a candidate and as the president — but both his mother and his current wife, Melania, immigrated to the U.S. Nevertheless, Trump was reportedly quite fond of his mom, who worked as a maid.

Here's what he wrote about her in his 1997 book, The Art of the Comeback, according to The New Yorker:

Part of the problem I've had with women has been in having to compare them to my incredible mother, Mary Trump. My mother is smart as hell.

Ten years before, in The Art of the Deal, the man who would become president lauded Mary Anne McLeod as "a very traditional housewife" with "a sense of the world beyond her."

In 1942, Trump's mother did become a naturalized U.S. citizen. This was six years after she married Frederick Christ Trump in 1936, and about four years before she gave birth to Donald Trump. That birth, obviously, would change the course of world history — and so, by extension, did the fact that Trump's parents met at all.

But they did, and the life and legacy of Fred Trump perhaps is what most positioned his son to become the man he is today. According to CNN, Fred Trump's early construction projects, apartments in Brooklyn and Queens, allowed him to gain the capital to invest in other lucrative projects. By the time Donald Trump was ready to launch his own career in real estate, his dad had amassed a fortune that would be equal to about $1 billion in 2017. Donald Trump considers himself to be more or less a self-made man, but the truth is that Fred Trump's enormous wealth and social and political influence is what allowed his son to break into and succeed in the business.

Both of Trump's parents have died; his father in 1999 and his mother in 2000. Because their son is now the president of the United States and thus one of the most consequential people in history, their legacy will live on for a very, very long time.