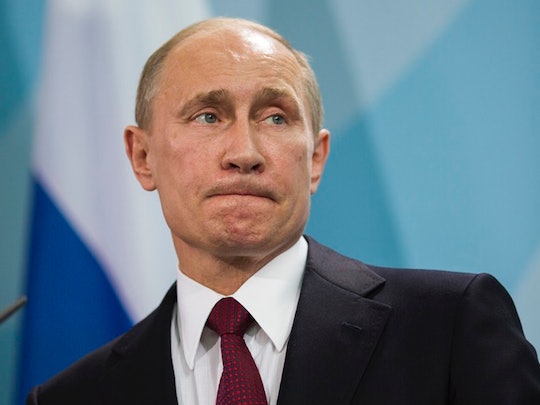 Who Are Vladimir Putin’s Daughters? The Russian President Has Tried To Keep Them Hidden, But The Internet Has Its Ways

Russian President Vladimir Putin gave his annual televised press conference on Thursday and stirred international curiosity when he spoke briefly of his daughters, who he's managed to keep mostly out of the spotlight. So, who are Putin’s daughters? And why is so little known about them? The Kremlin refuses to share anything about Mariya and Yekaterina Putina, and will not confirm or deny any speculation about where they live or what they’re up to. The only officially released pictures of the women, who are 29 and 30, respectively, are from early childhood.

“My daughters live in Russia and studied only in Russia, I am proud of them," Putin said in his conference Thursday, according to NBC News. "They speak three foreign languages fluently. I never discuss my family with anyone.”

Putin's position contrasts sharply with what Americans are used to. Everyone knows about Malia Obama’s internships on the sets of Girls and Extant, and anyone can Google what Sasha had for breakfast this morning — if they really wanted to. But, in Russia, the government controls the media, and personal information on Putin’s family is not allowed to be reported. Putin’s spokesman, Dmitry Peskov, consistently refuses to give up any information on them.

Some of the first widely-available information about Putin's daughters is that they were both born in Germany, where Putin served as a KGB agent in the 1980s, according to Vocativ. Mariya was rumored to be either dating or married to Dutch national Jorrit Faassen, and living with him in Holland, according to Vocativ. Pieter Broertjes, mayor of Hilversum, famously called for her deportation in the wake of the Malaysian Airlines MH17 disaster, according to The Guardian. Putin, however, has insisted that both his daughters live in Russia.

But what's far more interesting to is what Reuters uncovered about Putin's younger daughter, Yekaterina. She's reportedly married to Kirill Shamalov, the son of her dad's friend, Nikolai Shamalov. She holds a senior position at Moscow State University, assisting in a plan to expand the campus, and co-authoring numerous research papers. Oh, and she also secretly competes in "acrobatic rock 'n' roll dancing" under the name Katerina Tikhonova, according to Reuters. Yep, Putin just couldn't keep that one juicy tidbit hidden.

That's her in the GIF above, dancing with Shamalov at the 2013 world championships in Switzerland, where they placed fifth. I am not kidding. She's even the chairperson of two committees for the All-Russian Ferderation of Acrobatic Rock and Roll, and she's damn good. Check our her 2013 performances below:

If you don't have the time or inclination to watch the whole video (and you really should), at least skip to the 2:15 mark for a really impressive move. No wonder her dad is proud. And, just when he thought he could shield the his daughters from the spotlight, one of them had to go into acrobatic rock 'n' roll dancing.