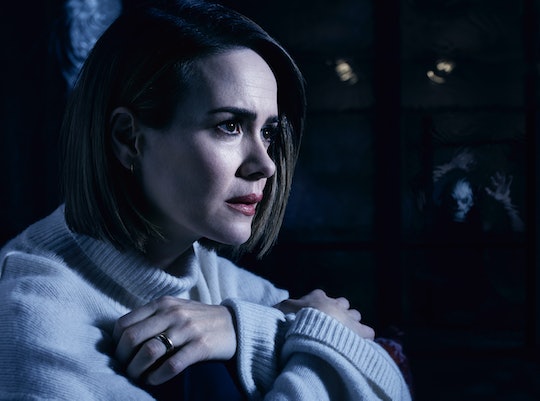 Ally Is In A Lot Of Danger On 'AHS: Cult'

Throughout the first episode of American Horror Story: Cult, Ally Mayfair-Richards was routinely harassed by a gang of clowns who may or may not have been hallucinations. While Ally was convinced the clowns were real, her wife Ivy thought they were manifestations of Ally's lifelong phobias. However, "Election Night" ended with one more attack. Ally was in bed when she heard a strange sound. When she turned it wasn't Ivy laying next to her. There was a scream before the episode cut to credits. But who attacked Ally on American Horror Story: Cult?

There was only a quick glimpse of Ally's would-be attacker, but it looked like it was one of the clowns that had been appearing to her throughout the episode. Specifically, it was the one with three faces on its head and three noses that looked (to keep it PG) like hot dogs. Unfortunately, that doesn't tell the audience much more about Ally's attacker's identity — or even if she was really attacked at all. It's very possible the jump scare at the end of "Election Night" was merely one more instance of Ally's panicked mind playing tricks on her, and the next episode will reveal she's unharmed and was experiencing nothing more than a nightmare and/or hallucination.

Season 7 of American Horror Story seems to be playing with reality and the idea of what's true and what isn't. It tells two versions of the same story without making it clear which is the one that actually happened: the audience watched clowns descend on Ally at the supermarket, but later heard from the cops that the cashier didn't see a thing; Ozzy witnessed clowns killing the neighbors, but his nanny, Winter, insisted he was nowhere near the scene of the crime. In both cases the cashier and nanny have doubtful authenticity, but the question still stands: what is the truth?

Ally might not have been attacked by anyone; it could be her phobias causing her to see things that aren't really there. But even if she is being assaulted time and again by the same group of clowns, then it's still not clear who is lurking behind the masks and makeup. The clowns haven't shown their real faces yet, nor have they revealed much of a motive outside of wanting to make Ally feel like she's going crazy. If they work for someone (like burgeoning cult leader Kai, perhaps) then that too is unconfirmed.

Viewers will have to wait until the next episode to see what Ally's fate was, because "Election Night" wasn't providing any clear answers. But considering Sarah Paulson (who plays Ally) is the clear star of this season, I very much doubt it'll be the last fans see of her.