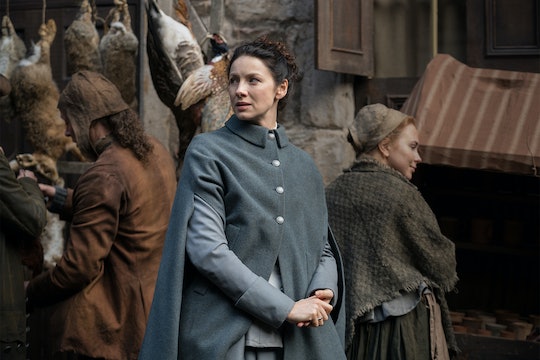 That Final Scene On 'Outlander' Left Claire In Danger

Now that Claire has finally made her way back to the 18th century, the adventures are all set to begin again, though it's not just going to consist of happy reunions with long lost loves. Episode 6 left on a cliffhanger, leaving many viewers desperate to know who attacked Claire on Outlander. Well, as an avid book-reader and resident Outlander scholar (at least that's what I like to call myself), I can assure you that her life isn't in any immediate danger, for now at least.

First, let's recap a little bit about what we already know about Jamie's current situation in Edinburgh. Claire correctly guesses that Jamie is not just a printer — based solely on his rock hard abs which have not been diminished at all in the past 20 years. "Most men in their 40s have gone a bit soft around the middle," she tells him. While Jamie wouldn't be Jamie without an Adonis-like physique, it turns out she's absolutely correct. Jamie admits that he does a "bit of smuggling" of whiskey, wine, and some brandy from his cousin Jared in Paris in addition to publishing seditious pamphlets on occasion. He tells her he has been arrested six times in the past two years. I mean, every marriage has its problems right?

If you remember earlier in the episode, post-original meeting but before the all-important sexual reawakening, Claire accompanied Jamie to a meeting in a brothel where Fergus had warned Jamie that their friend Mr. Willoughby was in a bit of trouble. While Claire chatted with Mr. Willoughby, Jamie had a vague, potentially sinister smuggling-related meeting with a colleague in the basement. This should give you a hint that things are about to get complicated, as indeed they do, especially considering the last scene is of Claire getting attacked by a stranger after she catches him going through Jamie's things. So who the heck is this guy? Warning: book spoilers ahead!

In the book version of events, Jamie and Fergus had returned to the brothel with some merchandise by this point, unintentionally bringing with them a bunch of excisemen. In 18th century Scotland, where whiskey smuggling was a fairly thriving industry, excisemen were employed by the government to enforce the extremely unpopular and largely ignored duties levied on whiskey and other spirits. (Think the Sheriff of Nottingham forest, but less popular.) In the book, the man who attacked Claire was an exciseman, but he was luckily shot by Mr. Willoughby before he could do any harm to her.

And just like that, Claire is right back in the throes of the dangerous and largely illegal lifestyle that Jamie has been leading for his entire life. You'd think the commitment to being an outlaw would have passed at some point, but Mr. Fraser is nothing if not consistent, and Outlander is nothing if not exciting. This little interlude with the excisemen is about to lead to more misadventure, and will probably cause you to fall slightly in love with Young Ian, the teenage son of Jenny and Ian Murray. This is a good thing, as he's got a lot more story ahead of him as well.

So if you're worried about Claire's immediate future, I wouldn't be. At this point, nothing can keep Claire and Jamie separate for very long. I don't know whether the series of events will unfold exactly the way they do in the books, but the show so far has stayed pretty close to the action of the source material. In any case, this should assure you that Claire and Jamie are not about to go through another painful separation from each other. Yet. As for later, you'll just have to wait and see.