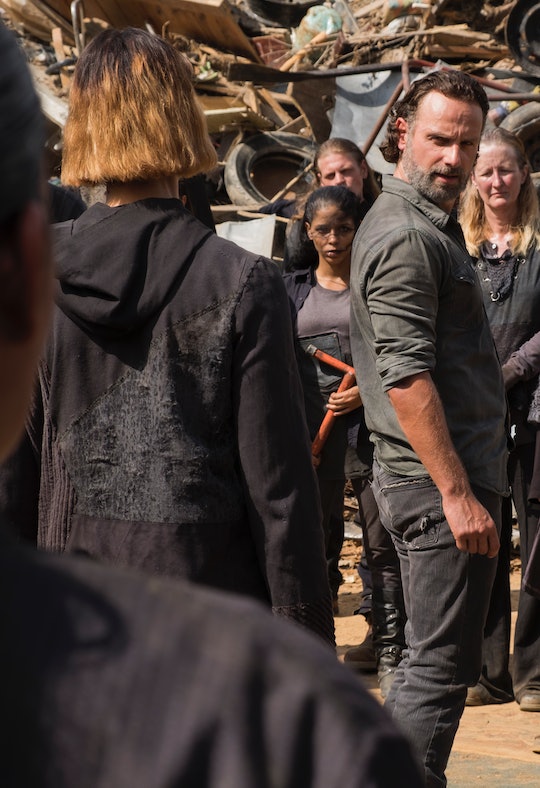 Rick Encountered A New Group On 'The Walking Dead'

After a season full of misery and loss, The Walking Dead returned with "Rock in the Road," an episode where things actually seemed to be looking up. Rick and his people were getting things done: trying to broker deals, slicing up zombies, stealing supplies, and sticking it to the Saviors by doing so. But they still had problems to deal with, like the sudden disappearance of one of their own. They ventured outside the Alexandrian gates to try and locate the missing Father Gabriel, but then ended up getting into trouble when a group of people appeared out of nowhere and surrounded them with weapons. So who attacked Rick's group on The Walking Dead?

Official answers will have to wait until the next episode, because "Rock in the Road" cut off on a cliffhanger without revealing who the people were or what they wanted. But that won't stop fans from trying to make a guess. There are a few rogue groups wandering around the world of The Walking Dead and any of them could be ready and willing to turn a gun on Rick and his nearest and dearest. This new group could be the Whisperers, the return of the Wolves, or maybe even Oceanside — or it could be an entirely new group fans have never heard of yet. Right now, though, there really isn't a lot to go on.

The Wolves seem fairly unlikely because there hasn't been a peep from them all season; most, if not all, of them were already dealt with during Season 6. Similarly, the odds of it being Oceanside are slim. From what I could tell, there appeared to be men in the group who attacked Rick's crew, and Oceanside is predominantly female because the Saviors killed off all the men. They also don't venture out of their seaside home for the most part, preferring to protect their community by staying put and hiding. The long-awaited Whisperers are a possibility, but the unknown group in the episode didn't appear to share the Whisperers' trademark zombie skin ensembles.

It seems like the group of survivors might be an entirely new organization. There have been all sorts of small groups that have shown up from time to time throughout the show and the comics under various names — the Scavengers (who became the Wolves on the show), the Marauders (who became the Claimers), and the Hunters (who became Terminus). One of those unused names could end up being repurposed for this new group, but that doesn't mean they'll have anything else in common with their comic counterpart. Or not! They could use a totally different name that was made up for the show.

Executive producer Greg Nicotero wasn't giving up any spoilers either when he told Entertainment Weekly, "We've teased this mysterious stranger that was at the lake and followed them back to Alexandria, so we don't know much about that group. We don't know if they’re good guys. We don't know if they're bad guys, but in the storytelling fashion of The Walking Dead, we always like to introduce these communities so that later they play a bigger part." He also separately mentioned Oceanside in the same statement, making it clear the new group has no connection to them.

Much like Rick, the viewers have no idea what they're dealing with in regards to this new group. Everyone will just have to wait and see what group managed to bring a smile across Rick's face.