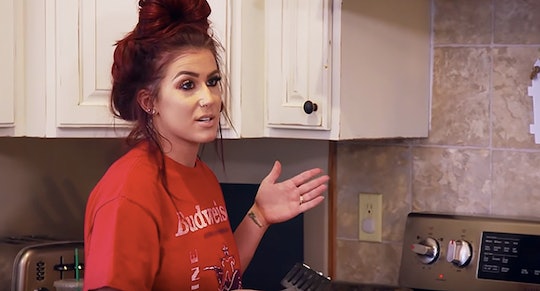 Teen Mom 2 star Chelsea Houska's family went through a big scare in early 2019 when their home in South Dakota was burglarized. The mom opened up about the ordeal during Monday's episode of TM2, but the question of who broke into Chelsea Houska's house still hasn't been answered. Talk about a scary situation.

Chelsea, a mom of three, and her husband, Cole DeBoer, went on vacation sometime in January or February of this year, a trip that didn't end on a positive note. When the couple returned home, they immediately realized that someone had broken into their house.

“She walked back to our room and she came out and she went white,” Cole recalled of Chelsea's reaction, according to The Ashley's Reality Roundup. “She said something’s not right in here.”

When Cole went to investigate, he discovered a startling scene.

"I went into our room, our master bedroom closet was absolutely destroyed," he explained during the episode. "Sh*t everywhere, bins dumped. I instantly freaked."

Ever the protective dad, Cole told Chelsea and their kids to wait in the bedroom while he searched the house for an intruder. Once he realized the house was clear, he went into rage mode.

“Seeing them terrified, I think I was the most pissed I’ve ever been!” Cole recalled.

The police haven't been able to identify the person who broke into couple's home, as Chelsea noted in the episode's voiceover. It's possible that the authorities have since located the suspect, but Chelsea hasn't provided an update about the situation.

Although it's not clear if an arrest will be made in this case, one thing is for certain — Chelsea wants to move. As for her 9-year-old daughter, Aubree? She's on board too.

The only person who seemed hesitant about the change was Cole, who explained that moving a simple process. Despite his reservations, however, Cole expressed to his wife that he wants her to feel safe no matter what.

“Whatever you need to do, and whatever it takes for you to feel better, you do it,” he shared, according to The Ashley's Reality Roundup.

Of course, Chelsea should make the decision that she feels is the right one for herself and her family. If she feels unsafe in the house, then maybe it's best if the family relocates.

Either way, fans are conflicted about whether the couple should move.

"I’m with Cole on this one 100%, it’s not that easy to just move," one fan wrote. "They would have to find a place, sell their place and that stuff takes time."

Chelsea, if you do move don’t allow MTV to film outside your home," someone suggested. "Also get an alarm system... sorry you went through that."

One person told Chelsea to take as much time as she might need to heal, stating: "It's not fun to have your private secure place violated... it will take some time to move forward."

No matter what Chelsea decides to do in this situation, she has the support of her fans. And here's to hoping the perpetrator who committed this crime is brought to justice one day.