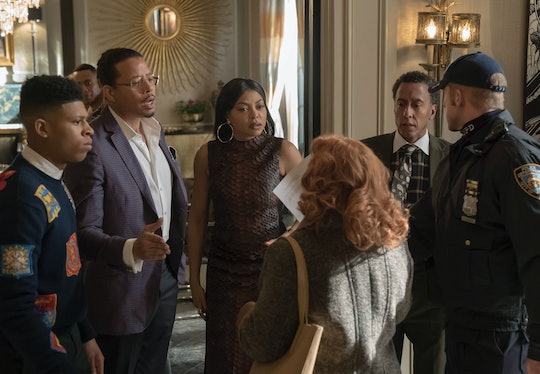 The Lyons Faced A Devastating Blow On 'Empire'

If the Lyons have anything — well, besides a lot of money and musical talent — it's a laundry list of enemies. Between Lucious and Cookie's criminal past to their grudges to their musical rivalries, there's a lot of people who may want to hurt them. At the end of Wednesday's episode, "Civil Hands Unclean," someone went below the belt: they called Child Protective Services on Bella, Hakeem and Anika's baby. They wouldn't reveal who contacted them, but there are a few possibilities. Who called Child Protective Services on Empire? Baby Bella was taken from the Lyons in a truly heartbreaking scene.

Being based on Shakespeare, it's safe to say that the Lyon family is complicated. Anika and Lucious are married, but it's basically a business transaction. Anika gave birth to Hakeem's baby, Bella... but they aren't together, either. Regardless, now that Hakeem's 21 years old, he decided to become more mature and take responsibility for his family. He actually had a revelation on Wednesday's episode and realized the importance of parenthood while watching footage of actual lions (as one does). Lucious was so impressed by Hakeem's behavior that he decided to change Bella's birth certificate to reveal the truth: that Hakeem is her father. Unfortunately, though, Child Protective Services ruined that special moment by taking Bella from the family.

Lucious' first thought was that Angelo's family was responsible for this. And it makes a lot of sense: the Dubois family was burned after Cookie denied Angelo's marriage proposal, and they could want to seek revenge. A scene earlier in the episode where Angelo took over Lucious' club may have been foreshadowing. While Lucious could be right on target, the Dubois' aren't the only ones who could've done this. Another possibility is Tariq, Lucious' half brother. Not only is he an FBI agent, but Anika played him when he was trying to get dirt on Lucious. Like the Dubois', he may have called CPS to get revenge on her — and given his involvement with the law, it'd be easy for him to do.

But wait, there's more! Another possibility is Giuliana. She's a Las Vegas club owner who's currently dating Lucious, but she knows she's not the only woman in his life. She's also opportunistic and not at all loyal: she killed her husband, for example. Beyond that, it's known that she and Cookie don't like each other. She could've done this to get back at her and Anika — the two other women who take up Lucious' attention. Hopefully these suspects are narrowed down in next week's episode and the Lyons get their Bella back.