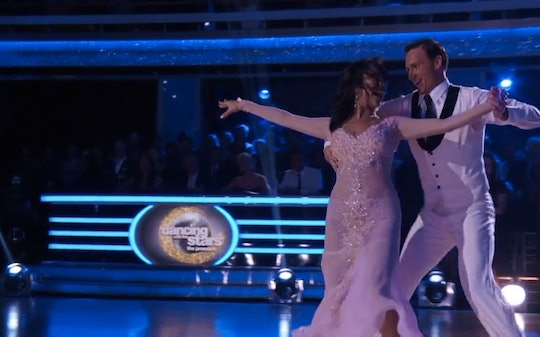 Who Charged The 'Dancing With The Stars' Stage? The Moment Was Completely Unexpected

When it comes to live television, it's also worth crossing your fingers and hoping something insane will happen. Usually nothing good or crazy ever does, but the premiere of Dancing With The Stars on Monday night didn't disappoint. At the end of the show after Ryan Lochte's performance, someone charged the Dancing With The Stars stage, seemingly trying to attack Ryan Lochte as he was finishing his performance. Romper reached out to both ABC and Lochte about the incident but didn't immediately return the request for comment.

It was pretty absurd. Lochte and his partner, Cheryl Burke, were standing on the stage waiting to hear what the judges thought of their fox trot when two men, allegedly wearing t-shirts with Lochte's name crossed out, hopping on stage. Lochte looked a little shocked and Entertainment Weekly reports that Burke was tearing up. As the two men approached, judge Carrie Anne Inaba said, "excuse me, excuse me" at something offstage before Tom Bergeron, ever a good host, cut to a commercial break.

There were also four women in the crowd, reportedly wearing the same anti-Lochte t-shirt, that were booing the Olympic swimmer and encouraging the two protestors. They were removed from the ballroom by dancer Derek Hough.

This kind of stuff never happens. The two alleged suspects were reportedly removed from the building by security guards and cuffed outside of the ballroom afterwards, according to some Twitter users who on the scene.

When the show returned, Bergeron said, “I would like to personally thank our security team for staying in shape." But it wasn't a joke to Lochte. The swimmer was a little rattled. And who wouldn't be, after being attacked on live television. He said, “I’m doing good. [There are] so many feelings are going through my head right now." He added, "[I’m] a little hurt. I came out here, and I wanted to do something that I’m completely not comfortable with, and I did.” His partner added that she hopes people will "give him a chance" for the rest of the season.

The protestors were probably upset with Lochte for an incident that occurred during the Olympics in Rio this August. Lochte, along with 3 other swimmers, allegedly vandalized a gas station after a night out and then reportedly lied to Brazilian officials, telling them that they were robbed at gunpoint. Though Lochte wasn't charged, the scandal has lost him some of his sponsorships and some love with fans.

Lochte and Burke were too shaken up to participate in the press line after the show, according to Entertainment Weekly. Let's hope they don't let it get in the way of their rehearsals for the week.