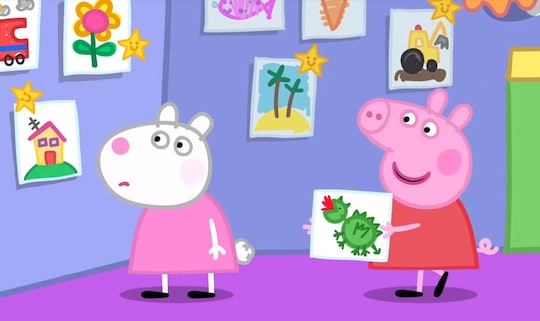 Creating one of the most beloved children’s animated shows in the world is no small feat. But the brilliant minds behind these series are rarely as well known as the cute and quirky characters. For example, who created Peppa Pig? The sweet-and-sassy piglet and her family who live in a yellow house on top of a hill came from a team of creators who, as it turns out, were in the right place at the right time.

The trio behind Peppa Pig — Phil Davies, Mark Baker, and Neville Astley — were all experienced pros when they landed the deal for the children's cartoon series. It seems they were all at a place in their careers where the stars aligned to allow them to work together. Davies is a producer while Baker and Astley are animators. The three met while studying animation at Middlesex University and decided to work together when Baker and Astley were having a bit of a slow season with their work, as The Guardian reported.

“I was shocked at how poor some children’s animation was,” Davies told The Guardian in February 2018. “The stories didn’t even seem to have a beginning, middle or end. A lot of it was completely incomprehensible and all the girls were either princesses or ballerinas.”

The trio pretty much went as far the other direction as they could by making Peppa a 4-year-old sassy piglet who loves mud puddles, albeit one who wears a dress. And they are unapologetic about her sometimes snarky attitude.

"Parents tell us Peppa is too cheeky — someone in the Australian parliament said she was peddling a warped feminist agenda. But if she was a boy character no one would be saying that," Davies told The Guardian. In fact, Peppa’s name is taken from a chili pepper that is "a bit fiery," according to an interview the creators did with KidzCoolit.com.

The trio founded the company Astley Baker Davies to produce Peppa Pig in addition to other projects. The company’s website notes that they are all high-achieving in their own right. Astley had a short film, Trainspotter, which was nominated for a BAFTA and won the Edinburgh Festival’s McLaren Award. Davies produced Six of One, nominated for a BAFTA, and Baker has had three short films — The Hill Farm, The Village, and Jolly Roger — all nominated for Oscar awards. Astley is also the author of the Peppa series of books, including Peppa Goes Swimming, Peppa’s First Sleepover, and The Story of Peppa Pig, according to GoodReads. Baker collaborates on some of the series as well.

In 2015, the company was sold to Entertainment One in a deal that netted each of the creators £47 million, according to RT. That’s about $56 million in today’s exchange rates. The goal of the sale was reportedly so Entertainment One could take hold of the property and drive licensing and merchandising earnings up toward $2 billion. “We think this is a property that can double in size over the next five years…We think we can go to $2 [billion] in five years. Peppa Pig is too big of an asset to not control it completely,” Giles Willets of Entertainment One told The Guardian. The company is well on their way to their goal, as Peppa Pig was worth 1.4 billion pounds in 2017, according to the Daily Mail.

Those numbers look rosy for the creators of Peppa Pig. But their greatest satisfaction thus far, I think, still has to come from the millions of small fans who are can't get enough of their little pink and sassy heroine.

More Like This
Rubble From 'PAW Patrol' Is Getting His Own Spinoff Series Full Of "Messy Demolition"
20 Of The Best Christmas Movies For Kids
How Old Should Kids Be Before They Watch The 'Christmas Story' Sequel?
14 Baby Names Inspired By 'The White Lotus' That Deserve A Round Of Aperol Spritzes