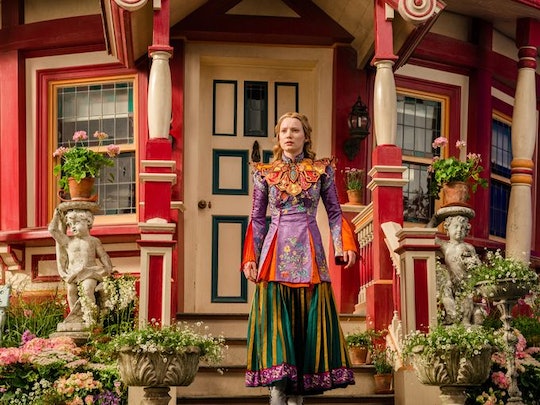 Who Designed Alice's Colorful Dress In 'Through The Looking Glass'? She's A Total Pro

Time is not running out; you can still catch Alice’s latest adventure in Wonderland on the big screen. Alice Through the Looking Glass is in theaters now and it is just as psychedelic and whimsical as it’s predecessor. The fantasy backdrops and production design are magical, no element was overlooked in the film’s immersive world, including the costumes. They are to die for; The entire film is basically a haute couture runway show. And while watching in the theater, many were likely dying to know who designed Alice’s colorful dress in Alice Through the Looking Glass.

Alice’s look is intricate with a mandarin collar, embroidered purple, green and orange fabric, and stunning small details like velvet buttons running down the sleeves. The mastermind behind the look, and all of the film’s fanciful costumes, is none other than veteran costume designer Colleen Atwood. She is returning to the Alice franchise after winning an Oscar for her work on the first film, Alice in Wonderland, and her work in this film is just as impressive.

Colleen Atwood is definitely a costume queen. She’s won two more golden statuettes for her work on Memoirs of a Geisha and the musical film Chicago. She’s designed costumes for almost every Tim Burton film, including Edward Scissorhands, Sleepy Hollow, Big Fish and the upcoming Miss Peregrine’s Home for Peculiar Children. The 68-year-old is also the brain behind the costumes for the upcoming Harry Potter film: Fantastic Beast and Where to Find Them. Atwood doesn’t limit her designs to the big screen either: She’s created costumes for television series Arrow, The Flash, and Supergirl.

Now, she’s back in fantastical Wonderland serving up some more lavish looks worthy of Lewis Carrol himself. “My job is fascinating because I have the opportunity to create new worlds from different times and perspectives,” Atwood said in a statement released by Disney.

For Alice’s main look in the film, the designer looked to John Tenniel’s illustrations from Lewis Carrol’s original editions for inspiration. She also researched Japanese looks from the 1980s to get a handle on their specific structure and designs. “I think everybody nowadays cross-pollinates in the media world that we live in,” Atwood said of her design inspirations. Then, she had to figure out how to make her ideas come to fruition.

“We needed yards and yards of vintage-looking fabric for Alice’s Chinese-influenced costume,” Atwood said. “But we weren’t going to be able to find that anywhere (and even if we did, vintage fabric is very fragile.” Knowing this, she had to figure out a way around this little hiccup—which she did by customizing her own fabric. “The textile department hand embroidered 70 yards of basic blue silk to create the look we wanted.” Now if I could just get a textile department to customize looks for me, I’d never have to leave a mall disappointed again.

The trick about Alice’s dress in the film, it’s actually not a dress at all. Atwood disguised a pair of paints under the dress for practicality. “As a designer,” Atwood mused, “you have to solve a lot of problems. Even thought people are wearing clothes that are supposed to look beautiful, they’ll have to do all kinds of things.”

Mia Wasikowska, who plays the titular Alice, appreciated Atwood’s attention to detail when getting into characters. “I think [costumes are] especially important on a film like this,” the actress told The Chicago Sun-Times. “Because you are in a bit of a void with so much of the film shot against green screens. The costumes are the first thing that give you a sense of where you are.”

For Atwood, the magic of her career comes from drawing on the characters for inspiration and using hair and makeup to tell the story.

“Costumes, hair and makeup can tell you instantly, or at least give you a larger perception of who a character is,” the designer told BBC News in 2003. “It’s the first impression that you have of the character before they open their mouth,” she continued. “It really does establish who they are.”

Once those impressions are set, the costumes can help ground the audience in a fictional world as whimsical as Wonderland. “Each audience brings their own imagination of reference to what they see,” Atwood told Australian magazine Grazia. “So as designers we have to create a world with which the audience connects. They have to believe in the characters and relate to them emotionally.”

It looks like Atwood achieved her goal with Alice Through the Looking Glass. The extravagant costumes she created for Alice are sure to transport audience members right into Wonderland.