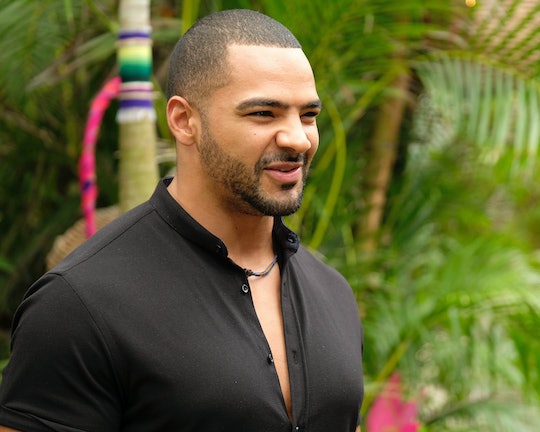 Clay Dated A 'Bachelor' Franchise Alum Besides Becca Before 'BiP'

Clay Harbor may have come to Bachelor in Paradise from Becca Kufrin's season of The Bachelorette, but he was actually in a serious relationship with another franchise alum just before coming to Mexico. Apparently, this relationship ended too close to the start of BiP for comfort, but viewers who missed out on the off-season drama may be wondering about Angela Amezcua, whom Clay dated before Bachelor in Paradise. She was on Nick Viall's season of The Bachelor and actually had her own stint in Paradise on Season 5.

On BiP, Angela fell super hard for Eric Bigger, from Rachel Lindsay's season of The Bachelorette. But Eric slowly realized the relationship wasn't right for him and wound up telling her he wasn't ready to commit. She left BiP alone that season. But then, thanks to co-star Chris Randone, she got an introduction to Clay, according to Us Weekly. The pair went public with their relationship on Instagram around September 2018, and everyone seems to be in agreement that they dated for around eight months. But the end date of the relationship stirred up controversy for Clay in Paradise, owing largely to Annaliese Puccini. She was a close friend of Angela's who alleged that she was heartbroken after Clay dumped her. Annaliese thought it was super disingenuous for Clay to come on the show so soon after the breakup, especially since he and Angela were discussing marriage, kids, and moving in together.

In Paradise, Clay was enough of a hot commodity to attract the attention of two ladies, Bibiana and Nicole, which of course earned him a pot-stirring date card, forcing him to pick between them. Bibi, fresh off a pep talk from Wells about being more proactive, made a beeline for Clay, and they had a pretty solid flirtation. He called her attractive like, four times. Admittedly, Clay did seem to have a more natural connection with Nicole.

While the two spent time together, viewers got a little more information about his relationship with Angela from his perspective. Clay revealed that, although they dated for eight months, he never told Angela he loved her. "To me, that's a really strong word," he explained to Nicole. "If I love you, you're my wife."

Nicole appreciated his honesty, but their date left Bibiana in tears.

"Of course I'm disappointed, I can't hide that," she said while Clay and Nicole headed off together. "It's hard for me to continue to be this vulnerable. It's really hard."

Finally, Annaliese confronted Clay herself, grilling him on having seen Angela as recently as two weeks before Paradise. She claimed they were looking at houses together, and that Clay wanted to marry Angela. According to his version of the story, however, he and Angela were actually more distant that Annaliese was making them out to be. He felt like he had moved on from the relationship. On his date with Nicole, Clay claimed they broke up three months before Paradise — not two weeks.

It doesn't seem like this is the last fans have heard from Annaliese on the subject, but for her part, Nicole appears to be taking Clay at his word.