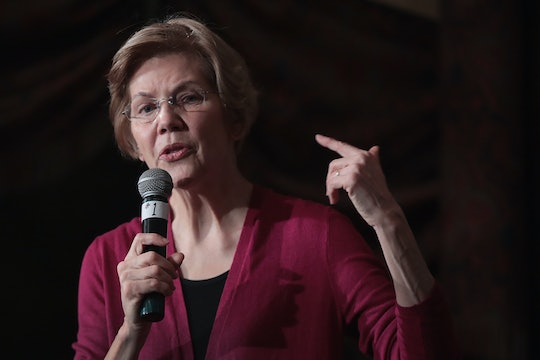 At the second round of Democratic debates on Tuesday, Massachusetts Sen. Elizabeth Warren wasn't shy about recalling her many accomplishments. And while the 2020 presidential candidate listed off examples regarding her political prowess, she mentioned a victory over a "popular Republican incumbent Senator." So there's a good chance some people at home wondered: Who exactly did Elizabeth Warren beat?

As ABC7 News reported, Warren addressed a question about her electability when the victory was brought up. "I know how to fight and I know how to win. I took on giant banks and I beat them. I took on Wall Street, and CEOs, and their lobbyists and their lawyers and I beat them," Warren said on Tuesday night. "I took on a popular Republican incumbent senator, and I beat him. I remember when people said Barack Obama couldn't get elected. Shoot, I remember when people said Donald Trump couldn't get elected. But here's where we are."

So who is the Republican Elizabeth Warren was referring? Though she did not explicitly say, it would most likely be former Republican Massachusetts Sen. Scott Brown. Back in 2012, Warren and Brown ran against each other in a high-profile battle that captured the attention of the nation. Brown had won his seat in 2010 and was incredibly likeable among voters. He and Warren were actually tied for much of the race until she pulled ahead toward the end.

One detail about the Brown-Warren race that caught the attention of the nation was Brown's criticizing of Warren claiming to have Native American heritage. A political TV ad from Brown even called out the former Harvard professor. “Harvard thought that Elizabeth Warren was a minority because she said so,’’ one man says in the ad, while another man says to the camera, "Harvard touted her as a minority."

“Initially, she said she didn’t know anything about it,’’ a third man adds. "She kept on covering up and going deeper and deeper into the hole,’’ says a woman. "Elizabeth Warren got caught,’’ says the third man.

As you probably remember, this wasn't the end of the Native American issue for Warren. (In February, according to The Washington Post, Warren apologized for calling herself Native American.) But she still handily won re-election during the 2018 election, according to Boston Magazine.

Now that we know who the "popular Republican incumbent Senator" most likely is, let's circle back to the original question for a moment: Is Elizabeth Warren electable? She definitely has an impressive list of accolades. And she seems to have a plan for literally everything.

Not to mention, Warren had several memorable moments during the debate on Tuesday. Like when she slammed the more centrist candidates — such as John Delaney — who said he wasn't running on "fairy tale" policies. To that, Warren replied, "I don't understand why anybody goes to all the trouble of running for president of the United States just to talk about what we really can't do and shouldn't fight for."

When talking about Medicare For All, Delaney argued that Americans should have the choice to keep their private insurance. “Why do we have to be the party of taking something away from people?” he asked. “That’s what they’re running on. They’re running on telling half the country that your health insurance is illegal.”

That's when Warren reminded him, "We are the Democrats. We are not about taking health care from anyone. That’s what the Republicans are trying to do, and we should stop using Republican talking points."

So, yes, in case you didn't realize, Elizabeth Warren means business. Like she said during the debate on Tuesday, she knows how to fight — as evident by her past win against Scott Brown, among her many accomplishments. And as far as her electability? I suppose the American people will soon make that clear.