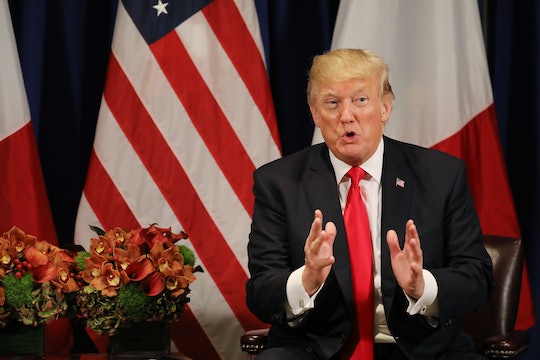 When he addressed the United Nations General Assembly on Tuesday, President Donald Trump called Kim Jong Un "Rocket Man," and it definitely got the internet talking. When I saw the hashtag #RocketMan trending on Twitter midday on Tuesday, I was personally concerned that something was wrong with the entertainer Elton John. But no, instead, it was in reference to the leader of North Korea, and what the president of the United States called him during an official address to the 72nd Annual UN General Assembly in New York.

While talking about Kim, Trump reportedly said, according to NPR:

Rocket man is on a suicide mission for himself and for his regime.

And even though it was probably meant to be a "stern warning" for the leader of North Korea, it came across a little silly and not exactly in line with the serious nature of the topic of what to do about North Korea. The country has conducted nuclear tests and fired ballistic missiles in recent days, so maybe trying to demean their leader by using a nickname from a popular Elton John song is not the best route to take when addressing an international body of leaders about the subject. Just a suggestion.

As you might imagine, Twitter had some thoughts about this latest Trump gaffe. And for the most part, those thoughts were not positive.

In general, the negative remarks about Trump calling Kim "Rocket Man" had to do with how ridiculous it is to call a dangerous leader a silly name, and how that sort of behavior makes America look to the rest of the world.

Some of the best responses, in my opinion, involved Elton John himself. He wrote the song "Rocket Man," which is technically actually called "Rocket Man (I Think It's Going to Be a Long, Long Time)" back in the 1970s. For the record, it's about an astronaut, not the threatening and unpredictable leader of a regime.

Some people even made jokes about Elton John being the president instead of Trump. But seriously, can you just imagine, just for a moment, where we would be right now if Elton John was the leader of the United States, and not Trump? At least the president using the term "Rocket Man" in that case would seem sort of ironic or self-deprecating instead of childish.

But it's not like this is the first time that Trump has said something that embarrassed a lot of the people he's representing as a world leader. In August, a poll found that in Michigan and Wisconsin, 64 percent of respondents said they were embarrassed by Trump, and 63 percent said the same in Pennsylvania — all states that Trump "won" in the election, according to CNN.

Ultimately, what does calling the leader of North Korea a silly and degrading nickname do for the United States? Does it make us safer, or does it make us look petty, and like Trump is unprepared for the world stage?

Last week, the United Nations Security Council unanimously passed a new measures to punish Pyongyang (the capital of the Democratic People’s Republic of Korea) on an economic level, with the support of both China and Russia, according to CNBC. Isn't that the sort of action we should be taking, and the sort of measure our president should be advocating for? Or are these moments that get Trump attention, but certainly not international esteem, the new, mortifying reality?

It remains to be seen what Elton John himself thinks of Trump using the term "Rocket Man" to describe the leader of North Korea. He previously requested that the Trump campaign not use his songs, including "Rocket Man," at rallies, according to Rolling Stone. But this is just a term associated with one of his songs, and not the use of a whole song, after all.

But a lot of people on Twitter heard "Rocket Man" and thought "Elton John." And not in the most positive way. Maybe Trump should move on to using nicknames from songs by artists who actually support him — like, who were all those acts lining up to play at the inauguration, again?