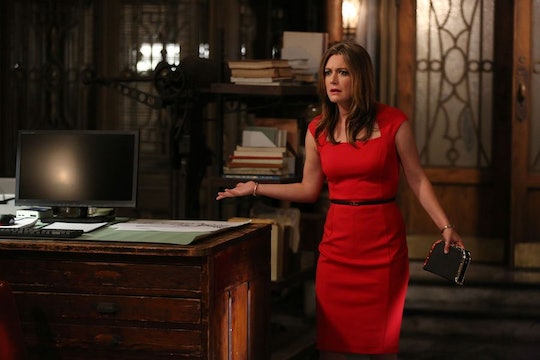 There's A New Threat On 'Scandal'

Scandal fans have come to know Olivia's father as the big bad. He ran B613, he had Tom kill Fitz's son, and he's been the mastermind behind plenty of schemes and murders. So, at this point, everyone, including Olivia, knows better than to trust him. However, the latest episode of Scandal revealed that while Rowan Pope may put the fear of God into a lot of people, there's someone, or something, else that actually scares him. So who did Rowan meet with on Scandal? The Woman in Red remains a mystery.

The latest episode of Scandal was filled with a lot of twists and turns, but it all began when it was revealed that Jake had disappeared for a few hours the night Frankie Vargas was killed. While Pope & Associates tried to figure out what he was up to, Jake told Olivia that he had proof she was the one who paid Tom to claim he killed Frankie and pin it on Cyrus. Obviously, that wasn't true and Olivia confronted her father only for him to tell her to stop talking about it and stop asking questions — a clear warning for Olivia that something was up.

However, it wasn't Papa Pope who was pulling the strings this time. Instead, the Woman in Red, or at least the people she works for, are. Apparently these people put Olivia's name on the money account for insurance so that she wouldn't try to prove Cyrus' innocence. The mystery woman then threatened Rowan with Olivia's life, reminding him that his daughter is a liability that they don't have to keep alive.

To add to the twists, it was also revealed at the end of the hour that Jake didn't actually kill Frankie's aide Jennifer, who had left that phone message, claiming Cyrus killed Frankie. She's actually been alive this whole time, hidden away in a cabin by Jake. Her involvement in all of this still remains a mystery, but if this new mysterious group wanted her dead, there has to be a reason. And if they ever catch word that Jake defied his orders, Rowan (or Olivia) could end up paying the price.

Fans will just have to keep watching Scandal to find who exactly this mystery woman is and what her appearance means for Olivia & Co.