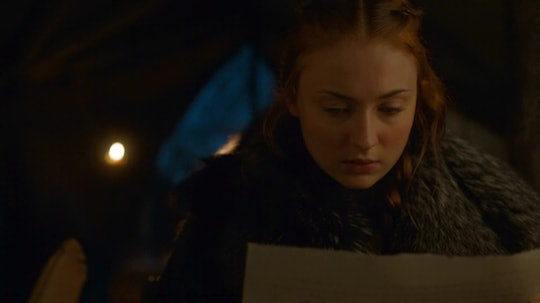 Who Did Sansa Send A Letter To In 'Game Of Thrones?' The Letter Has Been Decoded

On the latest episode of Game of Thrones, Sansa, Jon, and Davos went to the Northern houses to get support for their fight to take back Winterfell. With only limited success Sansa is worried they don't have enough men to beat Ramsay, but Jon believes they do. Still, without Jon's knowing, she decides to take matters into her own hands. But who did Sansa write that letter to on Game of Thrones? Though it's still unclear, the contents of the letter have been decoded.

But thanks to a dedicated Game of Thrones fan on Reddit, Sansa's letter has now been decoded. Redditor u/CreepyPancakes used a snapshot of the letter that was upside down, rotated it, and enhanced the image to make out most of the letter. Here's what we're now able to make out:

"[...] to protect me. Now you have a chance to fulfill your promise. [...] Knights of the Vale are under your command. Ride north for Winterfell. Lend us your aid and I shall see to it that you are well rewarded."

The Reddit user admits some of it is educated guesses, but for the post part everything look clears and accurate. It's now theorized that Sansa is writing the letter to Petyr "Littlefinger" Baelish, accepting his offer of help and use of the Knights of the Vale.

Although Littlefinger is sketchy, at best, he can be useful, and he really does care about Sansa on some level, even if his reasons for caring about Sansa are on the creepy side. Still, Sansa's right, she and Jon can use all the help they can get and having the Knights of the Vale by their side when they try to take back Winterfell will definitely be an asset. With the Knights' help, the Starks have a definitive chance of defeating Ramsay and winning the Bastard Bowl (if it happens).

The only issue with Sansa's plan is Jon, who definitely won't be happy when he discovers Sansa went behind his back to ask Littlefinger for help. Hopefully Jon will just get over it, though, because the last thing these two need to do is start fighting amongst themselves. The Starks are obviously stronger together rather than divided, and if they have any shot of beating Ramsay, they need to work together to do so.