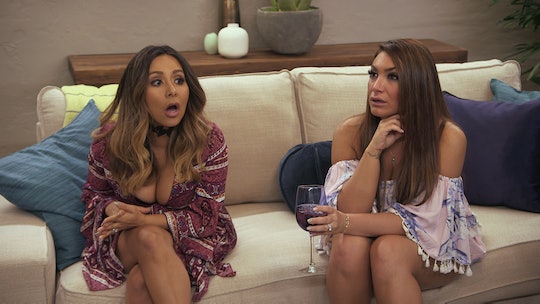 Jersey Shore: Family Vacation returned for an even longer Season 2, which filmed in Las Vegas, as well as back on their home turf in Seaside Heights, Neptune City, and Atlantic City. This week, it looks like a major brawl goes down, with fans on Twitter pointing out that it's the first time Pauly D has raged out since the original Jersey Shore. So who did the Jersey Shore cast fight with on Jersey Shore: Family Vacation? While we know they can go hard at each other, nothing matches the fury of macaroni rascals banding together against an outside enemy.

The jerk who sparked the fight appears to be a rando at a nice wine bar where JWoww, Snooki, Angelina, and Deena were having a classy adult girls night out. After Snooki dumps the contents of their unfinished wine bottle into a water bottle in her purse (hey, she paid for it!), the group gets ready to leave. JWoww and Angelina wait outside by the car, while Snooki and a pregnant Deena bring up the rear. As they make their way out, a man can be heard muttering "Every girl is fat" just as Deena walks past, apparently disappointed with his prospects at the bar. Deena reels and points out that hello, she's pregnant, and it's pretty uncool to call her and the rest of her friends fat within earshot.

Snooki and Deena go outside and report what happened to JWoww and Angelina, and JWoww goes into full protective mama bear mode. She is pissed. JWoww storms back into the bar and gets in the guy's face to tell him off, attracting bouncers (or possibly the show's production crew trying to intervene) along the way.

It's unclear how the Jersey Shore guys get involved, but in another clip that appears to take place a little later, they've joined the fracas.

"Piece of sh*t like you going after a pregnant girl," JWoww can be heard shouting. Pauly, who has always been protective of the meatballs, also yells at him as security pulls the guy away.

"I will beat you down so f*ckin' bad, bro," Ronnie mutters as he heads down a fight of stairs. JWoww and Snooki also get into a more physical altercation with an unknown woman (presumably someone in the guy's group). Chairs are thrown! "This is like guido Jerry Springer," Vinny jokes in the confessional as he narrates the scene.

A few people on Twitter pointed out that Snooki is pregnant, and immediately began concern-trolling her getting into a physical fight. But for the record, the scene filmed in July before she conceived, so there's nothing to worry about — at least as far as her fetus is concerned. Sparking a multi-bouncer wine bar fight is definitely questionable in terms of maturity, but it is pretty sweet to see the whole group banding together to protect and defend their pregnant family member.