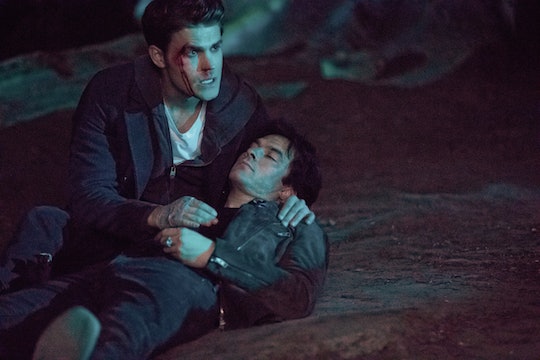 Someone Is Dying In 'TVD's Series Finale

It's still hard to believe that the world of Mystic Falls is coming to a close after eight seasons over supernatural hijinks and one of the steamiest love triangles arguably ever created on TV. And yet, here we are, almost at the end of the line. But this series isn't done with us just yet. In fact, it's been revealed that not everyone is making it out of this season alive. So who dies in The Vampire Diaries series finale? Given everything that's happened in Season 8 so far, I'd say the possibilities are pretty endless.

The news of another death comes courtesy of Entertainment Weekly, who recently spoke with TVD showrunner Julie Plec about her decision to kill off another main character so close to the show's final bow. "We wanted to go big, emotionally, with the action, and with the spectacular of it," Plec stated. "We were absolutely feeling epic." And while that is in no way reassuring, the good news is that we can seemingly rule out Elena's death as a potential option, given that the outlet referenced the final group scene as involving a crying Elena surrounded by (almost) all of her loved ones at a funeral. But whose funeral are they attending? That has yet to be revealed.

Granted, this show has never shied away from killing off prominent characters in the past. In fact, just this season alone we've said goodbye to both Tyler and Enzo — both of whom died at the hands of a Salvatore brother. But is it possible that Plec will go so far as to kill off a character we always assumed would be safe no matter what? Could Damon and Stefan be lying in that Mystic Falls cemetery by the end of the hour? I'm starting to think it's not only possible, but also highly probable.

Think about it — these brothers have been through so much throughout their time as vampires. It's not too difficult to believe that it's going to catch up with one of them at some point. My bet is that it'll turn out to be Stefan, who will hopefully find peace after several lifetimes of trying to repent for his sins. My theory is that they'll end up defeating Cade. Heck, maybe Stefan even ends up sacrificing himself in the process, thereby erasing the evil from his past and allowing him access to a better afterlife. It'd still be a tragic loss for sure, given how beloved of a character he's always been. But if it means Stefan finally finding peace, that may be the best parting gift the show could give him.

Damon is another option, of course, though I have a hard time believing the writers will reunite Delena only to separate them again. (That'd be a little too cruel, even for this show.) Meanwhile, Bonnie feels a little too obvious, especially since we know her life is currently linked to Elena's and could easily explain how she's able to return. No, I'm betting this death is going to be a seriously big twist, which (for me) narrows it down to the Salvatore bros.

Now, if you'll excuse me, I need to go stock up on tissues. I'm gonna need them.