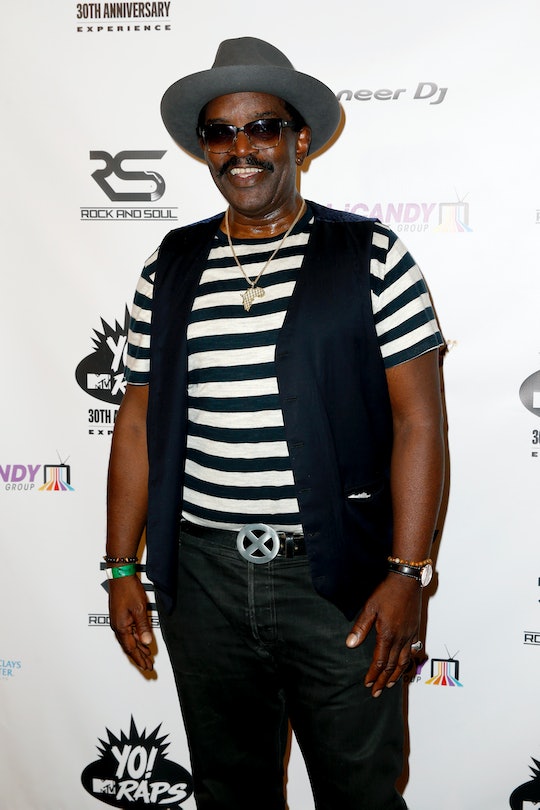 Netflix's latest documentary about cannabis criminalization examines the complicated issue through the lens of music, art, and culture with a hip hop pioneer at the helm. Considering its impressive lineup of interview subjects, including Snoop Dogg, Bob Marley's youngest son Damien, and members of Cypress Hill, viewers may be wondering who directed Grass Is Greener. Fab 5 Freddy makes his directorial debut with the documentary, but his roots in hip hop culture run deep. He even narrated the epic musical Google Doodle celebrating the 44th birthday of hip hop in 2017, according to the Washington Post.

Fab 5 Freddy was born Fred Brathwaite in the Bed-Stuy neighborhood of Brooklyn. According to a 1991 profile in The New Yorker, he became a staple of the 1970s underground creative scene in New York, cutting his teeth as a camera operator on Glenn O'Brien's New York City Public Access show TV Party. Chris Stein of Blondie fame co-hosted the show, and Freddy got name-checked in the band's 1980 song "Rapture" with the lyric "Fab 5 Freddy told me everybody's fly."

That same year, he was featured in a film O'Brien made starring renowned graffiti artist Jean-Michel Basquiat. Freddy was credited with serving as a bridge between the city's burgeoning hip hop scene uptown and the its thriving DIY art and punk scene downtown. In his New Yorker profile, Freddy cited Andy Warhol, whose circle he was a part of, as his biggest influence. By the late 1980s, Freddy was tapped to host MTV's groundbreaking series Yo! MTV Raps, the first internationally broadcast hip hop music video show.

Grass Is Greener may be Freddy's film directing debut, but he has directed a handful of music videos, including Nas' "One Love" and Snoop Dogg's "Who Am I? (What's My Name?)" He also boasts cameo appearances in the films American Gangster and Rachel Getting Married, as well as on television in episodes of Law & Order: Criminal Intent and CBS' Blue Bloods.

Thanks to his deep ties to the music community, Freddy had no trouble rounding up a stellar cast of interview subjects for Grass Is Greener. In addition to the aforementioned Snoop, Marley, and Cypress Hill’s B-Real and Sen Dog, he has DMC, Doug E. Fresh, Chuck D, and Killer Mike on hand, as well as leading experts on the history of marijuana criminalization.

According to the Netflix synopsis, the film "presents an unparalleled look at the racially biased history of the war on marijuana" as its experts "discuss the plant’s influence on music and popular culture, and the devastating impact its criminalization has had on black and Latino communities."

Said Freddy in a press release, according to Billboard:

My hope, as I light one up on 4/20, is that this film will entertain, educate, and enlighten people across the country and around the world about the rise of marijuana, the racially motivated reasons behind its initial criminalization, and the economic ramifications that continue to affect entire races of people.

Yes, the film released on 4/20 in thematically appropriate fashion and you can catch it streaming on Netflix.