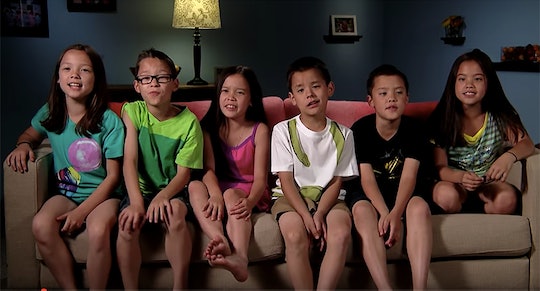 Who Do The Gosselin Kids Live With Now? Fans Have Questions

As hard as it might be for Kate Plus 8 fans to believe, the Gosselin sextuplets celebrated their 14th birthday on May 10. As for the teenagers' older sisters, Cara and Mady Gosselin, they turned 17 in October 2017. Sheesh, time really does fly. And now that the Gosselin kids are getting older, fans have new questions about their lives. Namely, people want to know who the Gosselin kids live with these days. The question is legitimate because it's no secret the custody arrangement between Kate and Jon Gosselin is *extremely* complicated. So, what's going on here? Has anything changed since Jon and Kate first split in June 2009? As it turns out, some changes might be afoot at chateau Gosselin.

It's no secret that Jon has a knack for making headlines. From hanging out with Lindsay Lohan's dad, Michael Lohan (2009 was an interesting year for the ex-reality star), to his public fights with Kate, Jon's personal life is often in the press. And on Tuesday, Jon grabbed attention once again when he shared a very rare photo of his 14-year-old son, Collin Gosselin. Collin, who is currently in a live-in facility, reportedly to treat his his unspecified disability, hasn't been pictured on social media for quite some time. So, when Jon shared the snap to Instagram, it's no surprise people took notice. Additionally, some fans couldn't help but point out that Hannah Gosselin, who is also pictured in the photo, has been hanging out with Jon more frequently.

On May 10, the sextuplets' birthday, Jon shared a photo to Instagram of himself and Hannah enjoying breakfast before school. "Happy Birthday Hannah!!! 14 already," Jon captioned the cute pic, according to Instagram. "Bday breakfast with my daughter before the bus stop!!!"

Presumably, Hannah slept over Jon's house the night before her birthday breakfast. And If Hannah spent the evening at Jon's, it *might* mean that she lives with him now.

"Does Hannah live with you now?" one fan asked about the situation, according to Instagram. "Praying she does."

"Does she live with you?" another person inquired.

Although there is no confirmation about whether Hannah lives with Jon full-time, a report published in August 2017 suggests she might split her time between the exes. “Jon and Kate had an emergency hearing with a judge after Hannah refused to go back to Kate’s house,” a source told InTouch Weekly. “The judge granted Jon equal custody of Hannah until he and Kate go to trial.” Translation: it's possible Hannah lives with Jon 50 percent of the time. Kate did not immediately respond to Romper’s request for comment, while Jon tells Romper in an Instagram message that he can't comment on custody arrangements.

When it comes to the couple's other kids, it looks like they live with Kate full-time. For starters, Cara and Mady do not speak to Jon — a decision the twins touched on in August 2016. "This year I'm going to turn 16. I'm going to be learning to drive, taking the PSATs, thinking about college...so much is going on in my life," Mady said about the strained relationship, according to the Daily Mail. "And the last thing I have time for is a toxic relationship." Cara added, according to the Daily Mail: "I wouldn't even know what to say about him."

Jon's visitation with the younger kids is spotty. Jon, who doesn't have primary custody of his sextuplets (this might be different for Hannah), explained in August 2016, according to Entertainment Tonight:

I haven't seen all eight of my kids together probably in three years. Three to four years. The kids that I do get are Hannah, Leah, Joel and Aaden. I guess the four have stuck together and said, ‘We're going to Daddy's and that's it.’ And maybe they'll raise a stink about it or something like that. Sometimes I get Alexis but not often. Madelyn and Cara, I don't see that much, or often. We're kind of not talking right now.

The last photo of Jon with his kids (beside Hannah) was taken on New Year's Eve 2017. Of course, it's possible that Aaden, Alexis, Joel and Leah have spent nights at Jon's since this snap was taken.

So, to recap: Aaden, Alexis, Joel and Leah live with Kate full-time. Hannah might be involved in a 50/50 custody arrangement, while Collin resides at a live-in facility. Who knows, however, how things might change in the coming years. When it comes to the Gosselin family, you never know what could happen down the line.