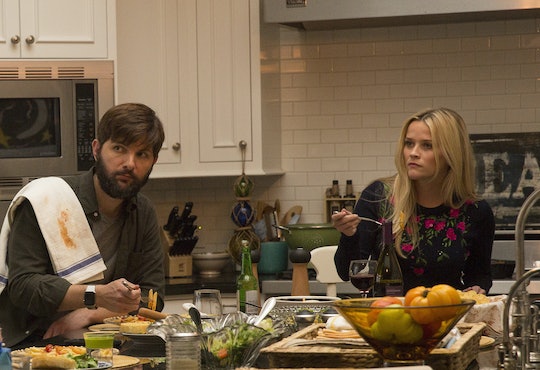 Adam Scott Has An Exciting New Role On HBO

Liane Moriarty's bestselling novel, Big Little Lies, is now a HBO limited series and the cast is out of this world. The show stars Reese Withserspoon, Nicole Kidman, Shailene Woodley, Alexander Skarsgård, Laura Dern, and, last but certainly not least, Adam Scott. So who does Adam Scott play on Big Little Lies? The Parks and Rec vet plays Ed Mackenzie and it's definitely a different type of role from the loveable nerd we know him for as Ben Wyatt.

Ed is the husband of Madeline Martha Mackenzie (played by Witherspoon), who is one of the three central female characters the show focuses on. According to The Hollywood Reporter, Ed is a "stable and loving husband" who likes to "play it safe." This is in stark contrast to his wife who is a formidable force in her community of moms and is currently dealing with the fact that her ex-husband and his new wife have moved into her beachside neighborhood with their daughter, who's in the same kindergarten class as Madeline's youngest. Yikes! It also doesn't help that Madeline's teenage daughter seems to have chosen Madeline's ex-husband over her. Thankfully Ed is there to be a calming force for Madeline... maybe. The show also includes a murder that Madeline is somehow tied up in, so maybe Ed isn't all that calming after all. Readers already know how this all could end if the show sticks closely to the book, but for first-time viewers you'll just have to wait and see how Ed is caught up in this crazy web of lies.

Besides Parks and Rec, there's plenty of other shows and movies viewers may recognize Scott from. Most recently he's appeared on Kristen Bell's hit new comedy on NBC, The Good Place. He's also appeared on well known shows, such as Burning Love, Party Down, Six Feet Under, Party of Five, Wasteland, and Boy Meets World. On the big screen, you may have seen Scott in Sleeping with Other People, The Guilt Trip, Friends with Kids, Our Idiot Brother, Piranha 3D, Leap Year, Step Brothers, Knocked Up, The Aviator, and The Secret Life of Walter Mitty.

While Scott may always be Ben Wyatt to Parks and Rec fans, it'll be great to see him in an exciting new role, working with so many other amazing actors.