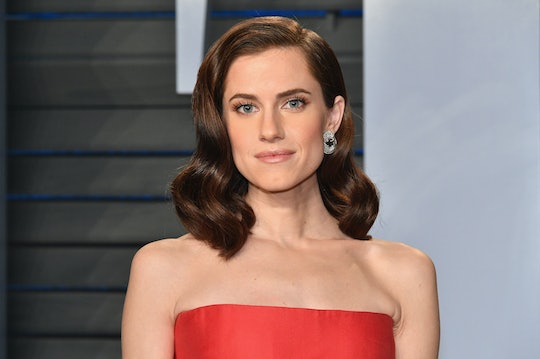 Warning: Season 2 finale spoilers ahead! The Season 2 finale of A Series of Unfortunate Events ended with quite a few cliffhangers. The most pressing was obviously Violet and Klaus' imminent plunge off a literal cliff, but other mysteries will plague viewers long after those final minutes. The sudden arrival of Allison Williams definitely came as a surprise, especially because the audience has no idea what her relevance to the story will be — or even what her name is. So who does Allison Williams play on ASOUE, anyway?

Fans have been wondering that very thing ever since her casting was announced ahead of the season premiere. Her character wasn't revealed in the finale, but there are a few key details about her to keep in mind. When Lemony was informing the audience about all the mysteries he doesn't know the answers to, he listed the following uncertainties: the fate of his late brother's taxi, the location of the highly sought after sugar bowl, and the identity of the previous Madame Lulu before Olivia Caliban. "Though," he added, "reliable sources tell me it's a woman I know very well."

The episode appeared to use visual cues to explain at least some of that. It seemed like Williams arrived in Jacques Snicket's former taxi, and the overlay of narration indicated she had been the woman who played the part of Madame Lulu before Olivia took over. That confirms that Williams' character is likely another member of V.F.D., but it could point to her identity as well.

There are always a few different possibilities when trying to figure out the answer to a theory about ASOUE, and a couple of different clues that might help reach a conclusion. Williams is playing an unknown member of the V.F.D. who previously acted as Madame Lulu. She's close enough to the Snickets for Lemony to remark on it, and to possibly be in possession of Jacques' taxi. There's a chance she might be another unknown woman who worked with the V.F.D.: the woman in the dragonfly costume whom Count Olaf failed to push off a cliff.

However, the show seemed to be indicating that the dragonfly woman was actually Violet, Klaus, and Sunny's mother, Beatrice Baudelaire. That could mean Williams is playing Beatrice, provided she did survive the fire after all. But Williams seems a little young to be the mother of young teenagers, especially considering the ages of Beatrice's contemporaries in the V.F.D. And while it's impossible to say how long Williams' character was staying with the Caligari Carnival, Beatrice would have had to arrive there pretty soon after escaping the fire to hold her position for any length of time before Olivia appeared.

Instead, fans landed on a fairly compelling theory in the comments section of Williams' announcement post on Instagram: she might be playing Kit Snicket, sister of Jacques and Lemony. Kit appears in the later books of the series, though she had been mentioned several times before. In The Grim Grotto, she finds the Baudelaires on Briny Beach and whisks them away in a taxi not unlike the one Williams drove up in.

Kit was one of the heroic members of V.F.D. who sought to put out fires rather than start them like Count Olaf. Though Williams didn't quite match the bespectacled illustrations of Kit in the books, the show has altered characters' appearances before. Kit is also pregnant, but it was difficult to say whether Williams' character was pregnant or not.

There isn't much evidence to go off of when trying to determine who Williams is playing. But considering she was set up to be an important character and Kit's introduction is long-awaited, it seems like a fair assumption that she is Kit Snicket.