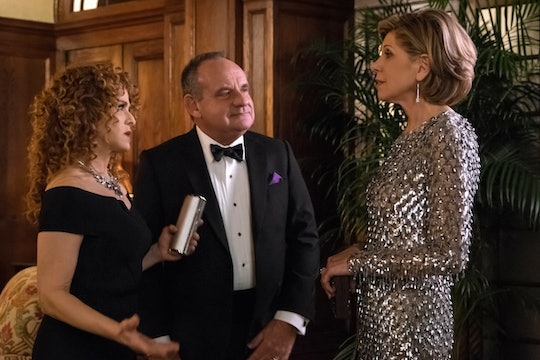 Bernadette Peters Is Putting Up A 'Good Fight'

CBS is bringing us back into the world of The Good Wife with its new, CBS All Access-exclusive streaming show The Good Fight, which stars Christine Baranski as Diane Lockhart. The spin-off follows Diane on the cusp of retirement, when all her savings are lost in a massive Ponzi scheme run by Henry Ridell, her financial advisor and one of the most powerful men in Chicago. The Good Fight also introduces us to new characters played by, among others, Bernadette Peters and Game of Thrones' Rose Leslie. So who does Bernadette Peters play on The Good Fight? Actually, her character has a lot of similarities to Alicia Florrick, although, after that Good Wife series finale slap, she probably won't be making any appearances in Diane's world.

Peters plays Lenore Ridell, wife of the financial advisor who lost all of Diane's (and a significant chunk of the city of Chicago's) money. They're referred to in the show as "the unofficial first family of Chicago," to give you an idea of the scope of their power and influence in the city. Rose Leslie plays their daughter Maia, who is fresh out of law school and has landed a job at Diane's firm. Unfortunately, when news about her father breaks, she becomes an outcast and along with Diane, who has been iced out of the firm after dissolving her partnership to retire, the two seek new jobs together at Luca Quinn's firm.

According to Deadline, Peters' character is integral to her husband's success. Lenore is described as coming from "a tough working-class background and is a natively brilliant financial whiz." She also apparently expanded that already impressive fortune through their family’s private investment firm that is considered to be "the envy of the financial world." So I doubt she's going to be thrilled with the idea that their good name is now being dragged through the mud in light of this latest money scheme.

Peters enjoys the same Tony Award-winning status as The Good Fight's star Christine Baranski, though she has plenty of TV credits to her name, too. The actress is just coming off a recurring role on Mozart in the Jungle, and before that, she did a guest stint on NBC's musical drama Smash. But her six-decade career spans Broadway musicals and plays, movies, TV shows, and animated voiceovers. She's won a Golden Globe and she's twice Emmy-nominated, which barely scratches the surface of her awards haul. She has a Grammy nom under her belt, too, along with three Tony Awards, including the Isabelle Stevenson Award for humanitarian efforts in the theater community.

Suffice to say, Peters is an incredible addition to the already strong cast, and whatever's in store for her on the show, it will probably delight fans.