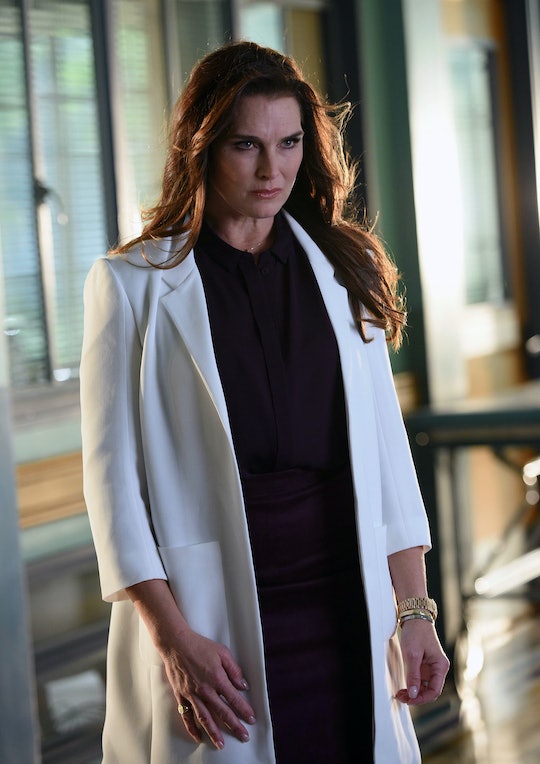 Who Does Brooke Shields Play On 'Scream Queens'? Dr. Scarlett Lovin Might Be Important

There have been plenty of guest stars throughout Season 2 of Scream Queens and they've all played their respective roles opposite the series regulars, but even with a handful of episodes left, the guest stars haven't finished arriving just yet. So, who does Brooke Shields play on Scream Queens? Dr. Scarlett Lovin will be making an appearance at the C.U.R.E. institute as the Chanels' favorite TV doctor, likely there to investigate (or at least learn about) what's been going on. Obviously, it reeks of a Shields death scene, but why is her character coming to the show now?

We know currently know who all three of the killers are (Wes, Dr. Cassidy, and Nurse Hoffel — unless there's a fourth one running around out there), and while Dr. Scarlett Lovin will more than likely be another victim rather than another villain, she could be used to help bring the Green Meanie identities out into the open for all to see. Serving as a sort of female Dr. Oz, Dr. Lovin is a good-looking and glamorous TV doctor, who is idolized by the Chanels and proves to be their role model. (Shocker.) In the promo for Season 2, Episode 9, you can see Hester up to no good as per usual and Zayday still being held captive. Meanwhile, the Chanels are busy screaming and running for their lives as per usual. So how is Shields going to factor into all of this?

At the beginning of the season, much like actual medical dramas on TV, there were patients of the week on Scream Queens. First there was the woman with hair all over her body, and then there was Chanel Number Five's boyfriend with the boils covering his face and body. Now, however, with just a couple of episodes left of the season, there is little time for all of these side stories. So Dr. Lovin is likely going to play the "pivotal role" that Entertainment Weekly claims. But any character that could potentially put Chanel Oberlin in her place is the best kind.

There's a chance Dr. Lovin could provide a link to the past to help further explain the story of the Green Meanie, or she may be there to help Cathy Munsch with her own illness. But regardless, she's likely going to be there to add an important element to the already existing storylines. The new generic Chanels were brought in to have extra characters to kill off, and since Shields is appearing in just one episode — and she's a character that the Chanels look up to — she probably won't last very long either. But who are we kidding — everyone on this show is basically doomed.