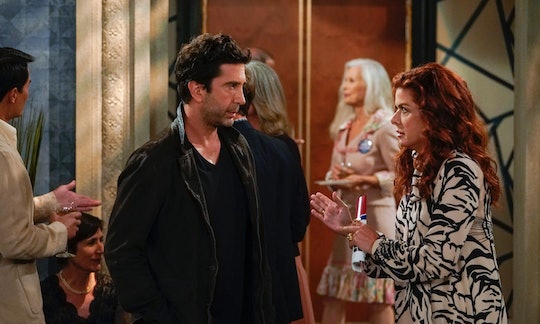 David Schwimmer's Role On 'Will & Grace' Is Definitely *Not* Ross Geller

Everyone's clamoring for nostalgia wherever they can find it so TV reboots and reunions abound. Let's face it — a good show is a great escape. The premiere of Will & Grace joined the ranks when a familiar face appeared as, what is assumed to be, Grace's new love interest. If you're a fellow "friend," you're one step a head of me. In case you missed the hype of announced guest stars or their roles, you're probably thinking "who does David Schwimmer play on Season 10 of Will & Grace?"

Sorry to break all the hearts, but Schwimmer doesn't play the Ross Geller you know and love from '90s sitcom, Friends. Instead, he's a grumpier, meaner version of his beloved fictional counterpart that goes by the name of Noah — or, as he is known in the Twitterverse "Westside Curmudgeon." It's not too far-fetched if you think back to all the times Ross raised his voice over something like, say, that post-Thanksgiving sandwich he looked forward to eating only to discover someone at work had gotten to it first. I felt that pain that on a deep level. The internet seems to agree, deeming Noah as "Angry Ross" and I'm totally with them.

It actually makes sense if you think about it. For at least five seasons, Schwimmer's guest role of Noah could prove to be an alternate version of Ross. Between his love life with on-again-off-again-on again (were they really on a break though?), Rachel (Jennifer Aniston) on Friends, perhaps Noah is Ross Geller in an evolved state; one that's been through it all and he's pretty much over it. Relatable. In regards to Noah, Debra Messing told The Hollywood Reporter, “His character is as far away from Ross as you could possibly get, and his character really pushes Grace's buttons. It really brings out an energy that is new to the show, and that's really fun.”

You first meet Schwimmer's moody character when Grace spots him at a reception where she's running for president of the New York Society of Interior Designers. Immediately after what Grace thinks is flirting, Noah tweets, "I'm running for the dumbest thing in New York" with a photo of the pamphlet she gave him. Obviously this sets up Noah's monicker perfectly — but also rubs Grace the wrong way.

The whole debacle led Grace to confront Noah, demanding he take down the mean-spirited Tweet. After her third attempt (and a lot of banter in between) he agreed. Their "relationship" has a rocky start already, but would Grace (or Ross) have it any other way?

Before this new role, what has Schwimmer been up to exactly? He told the Awards Chatter podcast in 2016 how insta-fame affected him, saying, "It was pretty jarring and it messed with my relationship to other people in a way that took years, I think, for me to adjust to and become comfortable with." He went on to add that fame made him want to hide. "I was trying to figure out: How do I be an actor in this new world, in this new situation? How do I do my job?"

If you were paying attention, he didn't stop working completely in the post-Friends era. With directorial, theatre, and voice work to his credit, he's been seen on Curb Your Enthusiasm, 30 Rock, Episodes, and the BBC's Come Fly With Me. He's also mentioned how distancing himself from Ross Geller is next-to-impossible. "I'm sure there will be people … saying it's just Ross up there," he told The Independent. "And I'll take that … really hard actually." These sentiments are rumored to be among the reasons there will never be a Friends reunion. He appeared on Megyn Kelly Today confirming as much saying "Look, the thing is, I just don't know if I want to see all of us with crutches [and] walkers." That does sound sort of depressing, no?"

Regardless of Schwimmer's past, fans are enjoying him in the present among Will and Grace, Jack and Karen. It'll be interesting to see how the rest of Westside Curmudgeon's role pans out. Will he and Grace find common ground where he's not completely insufferable or will she enjoy the chase of someone so brazen? For now, it's fun to watch two blasts from the past share a screen, even if only for a few episodes.