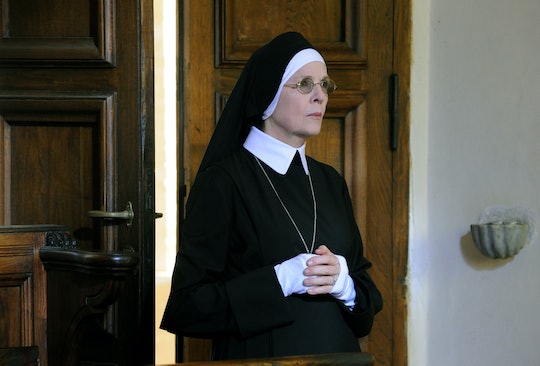 Diane Keaton Is Having "Nun" Of Your Nonsense

This weekend, The Young Pope premieres on HBO, a new miniseries that follows a fictional young, American pope played by Jude Law, who wants to break all the rules. So who does Diane Keaton play on The Young Pope and how does she fit in to the overall storyline? Keaton plays Sister Mary, the nun who raised Law's character when he was orphaned. After he's elected pope, he takes the name Pope Pius XIII, and brings Sister Mary to the Vatican with him to serve as his confidante and advisor.

Just in case you were thinking that a young pope would mean a progressive pope: think again. Law's character is a rule breaker — he smokes in the Vatican even though it was banned — but he breaks rules for the wrong reasons. Smoking is one thing, but wanting to ban gay priests because he assumes they're all sexual abusers is entirely different. If the young pope sounds like a bit of a jerk, you're on the right track. I mean, all you have to do is read up on a little history to know that his namesake, the other Pius, wasn't exactly the greatest guy (he didn't do much to stop the Holocaust or fascists in Italy during World War II, namely). But the young pope's character defects are probably Keaton's character's fault.

Sister Mary really believes that Lenny Belardo, the pope's American name, is blessed by God, so if he's a little narcissistic, maybe it's her doing. (People always seem to blame the parents for messing up their children, right? Why stop now?!) But she also tries to keep him grounded. Upon becoming the pope, Sister Mary counsels him on putting away his baggage and troubles and focusing on the new job and directing the Church.

She's sort of his Kellyanne Conway, according to The Washington Post, and after he gives a harsh speech, she makes a public statement on his behalf doubling down on his claims and telling people that he is "infallible." You'll have to wait to see how she feels about Pius' untraditional methods of politicking in the Vatican (and how she feels about smoking indoors).

According to Variety, "Belardo will face losing those closest to him and the constant fear of being abandoned, even by his God," so it's possible that things get a little sour between him and his mother-like figure.

The show was shot in Rome and is directed by Paolo Sorrentino, who won an Oscar for his 2013 film, The Great Beauty. So be sure to tune in for The Young Pope premiere, which makes its HBO debut at 9 p.m. ET on Sunday, Jan. 15.