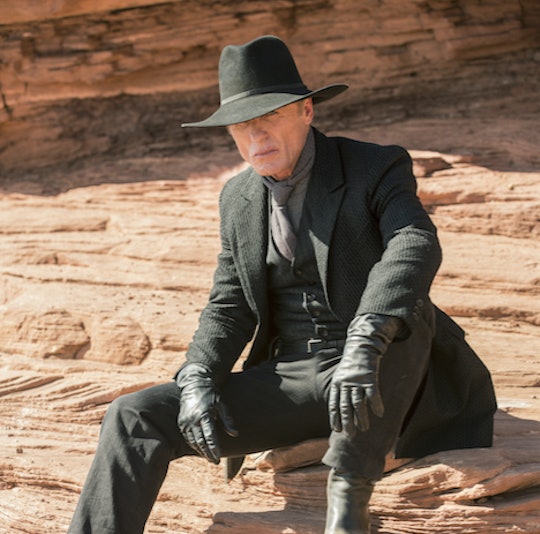 Who Does Ed Harris Play On 'Westworld'? He's A Terrifying Villain

With only one episode under it's belt, Westworld is already being called the new Game of Thrones. A reboot of the 1973 western sci-fi film of the same name, HBO has produced another hit show that already has fans hooked and filled with questions. The show has an all star cast and an amazing storyline that is keeping viewers engaged. One of the key parts of the show is actor Ed Harris who plays the Man in Black on Westworld. Seen as the show's version of the villainous Gunslinger in the 1973 film there's a lot of mystery surrounding the Man in Black, the first being is he actually a human?

Westworld is centered around a theme park of the same name where rich guests can come and act out their every fantasy in the town that looks like the set of a Western film. There's a sheriff, dangerous outlaws, a brothel, and bandits. Guests can be the hero of their own stories, killing outlaws and saving the innocent daughters of lawmen. Or they can do the complete opposite and just spend your time in brothels or committing heinous crimes. It doesn't matter what guests want to do there because the park is made up of lifelike robots that can't harm humans and live their lives in an endless loop where they forget everything that happened the day before.

From what we've seen so far of the Man in Black he's obviously not a good guy and it seems in Westworld the humans are definitely the villains who take advantage of the robots. Therefore all signs point to the Man in Black being human but if that's the case why all the mystery? The Man in Black has apparently been going to the park for decades and is a bit obsessed with the place. Plus with all his problematic antics in the park one would think those in command of the park would step in yet no one has. Is it possible that's because he's not a human after all?

There's already plenty of theories surround the Man in Black but the truth is we won't really know the truth behind this character until it's revealed in the show. We'll just have to keep watching to discover the truth about the Man in Black.