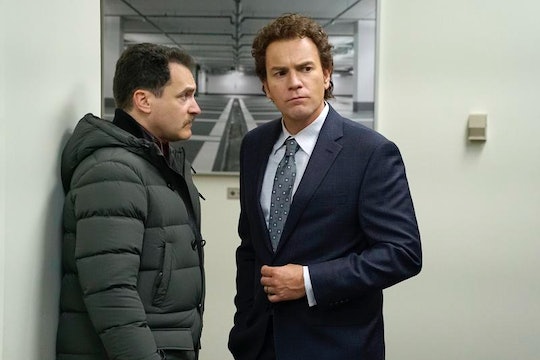 The Emmy-nominated FX series Fargo is returning for it's third season and this latest installment will once again take fans to Minnesota where murder and mystery continue to thrive. This season is filled with an incredible cast, just as the seasons that came before it, and fans are most excited to see Star Wars alum Ewan McGregor in the series. So who does Ewan McGregor play on Fargo? He actually has more than one role in the franchise.

In this installment of Fargo, McGregor will play feuding brothers Ray and Emmit Stussy and fans may not recognize him at first. According to USA Today, Emmit is "the well-off 'parking lot king of Minnesota,'" while his younger brother Ray is a struggling parole officer in 2010 Minnesota. And the transformation the actor takes for these parts is pretty shocking. In fact, prior to shooting, McGregor shaved his head. He also gained weight for the role of Ray, and wore spanx for the role of Emmit.

On the show, the two brothers' feud is over an inheritance from their long-dead father, who gave Emmit a valuable postage stamp but only gave Ray a beat-up red Corvette. Their story begins with Ray trying to steal the stamp back, leading to the level of absurdity and violence that Fargo fans have come to expect from the show. This season will also include ties to the mob and though both brothers will be egged on to continue their long standing feud, they'll also defend each other to their co-conspirators, as siblings tend to do.

Though most fans will recognize McGregor as Obi-Wan Kenobi in Stars Wars Episode I-III, he's also appeared in a lot of other films over the years. Most notably he's starred in Trainspotting, Moulin Rouge!, Big Fish, Angels & Demons, Nanny McPhee Returns, T2 Trainspotting, and most recently he played Lumiére in the live-action version of Beauty and the Beast.

Fargo isn't McGregor's first time appearing on the small screen, however. In the '90s, he had recurring rolls on the miniseries Lipstick on Your Collar and The Scarlet and the Black. He also made guest appearances on Tales from the Crypt and ER, which he received an Emmy nomination for. Still, this is McGregor's first full-time TV series role and with the level of success Fargo has received in the past, it would be surprising if he didn't walk away with another Emmy nomination and maybe even a win.