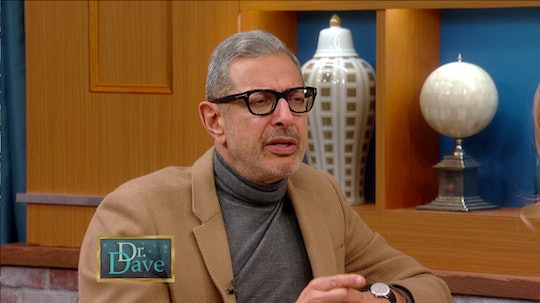 Who Does Jeff Goldblum Play On 'Kimmy Schmidt'? He Plays A Manipulative Character

Unbreakable Kimmy Schmidt is back, and among Season 2's biggest cameos is one by Jeff Goldblum, who sadly, plays a character who has nothing to do with his Jurassic Park role on a show otherwise stuffed with '90s references. So who does Jeff Goldblum play on Kimmy Schmidt? He shows up in Episode 11, titled "Kimmy Meets a Celebrity" (don't get excited — he doesn't play himself, either) as Dr. Dave, a "celebrity psychologist" with his own talk show.

We meet him when Kimmy's bunkermate Cyndee shows up in New York, excited to meet a new therapist she's had a few phone sessions with. Kimmy is excited, too, because she has just started her own therapy journey with a doctor named Andrea (played by Tina Fey), and she's happy that she and her friend are both getting the help they need. But it quickly becomes clear that Cyndee's therapist, Dr. Dave, has much more exploitative intentions. Cyndee winds up being the guest on one of his talk show episodes dedicated to "superstars of tragedy," in which she has to unpack her kidnapping experience in front of a live studio audience.

Kimmy knows this isn't good for Cyndee, but winds up getting sucked into the show herself when she tries to help, because Dr. Dave is uniquely great at manufacturing drama for ratings, even going so far as to host Cyndee's wedding on the show. (Never mind that her husband-to-be is gay and she believes having a baby is a quick fix for her 15 years of bunker trauma.)

Kimmy ultimately learns how to experience the valuable emotion of helplessness and cries for the first time since before she was kidnapped. Cyndee is so moved by the fact that Kimmy is crying out of concern for her that she puts a stop to the wedding, and foils Dr. Dave's ratings ploy.

The character of Dr. Dave is a spot-on satire of talk shows that air out the sordid circumstances of people's lives for TV audiences. It's pretty clear that he doesn't actually care about his "patients," considering he interrupts them to pivot to a sponsor mention whenever he can manage it. He's not even a real psychologist — Dr. Dave admits that he merely went to pharmacy school (which is a feat on its own). His elaborately staged "exposure therapies" in front of a live studio audience are clearly more for spectacle than for the good of a guest. His soothing affect, combined with how good he looks in a blazer-plus-turtleneck combo, definitely make Jeff Goldblum a perfect fake TV therapist, though.