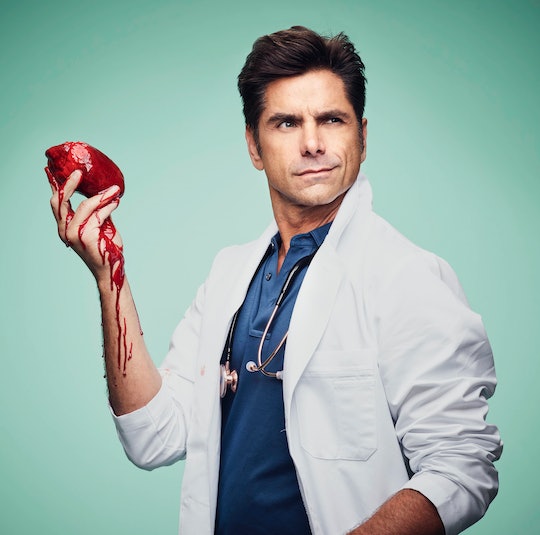 Who Does John Stamos Play In 'Scream Queens' Season 2? His Character Is Hiding Something

Scream Queens will be back for Season 2 before you know it, and its second season promises some big changes. Though the majority of the cast will be returning (at least those who weren't killed off the first time around), the show will also be introducing some new characters when it makes its way back to our screens on September 20. One new character will be played by John Stamos, fresh off the cancellation of his sitcom Grandfathered. Stamos has been hyped heavily in the show's promotional works so far, so it looks like he might play a major role in the season. But who does John Stamos play in Scream Queens?

One of the biggest changes in the show going forward into Season 2 is a brand new setting. Instead of a sorority house haunted by past misdeeds and current killers, Scream Queens will be set in a hospital. Stamos will be playing a member of the staff, a doctor with the delightfully improbable name Brock Holt. A press release describes Dr. Holt as "the hospital's brilliant, but secretive, head surgeon." After having previously appeared on both Glee and The New Normal, Stamos can consider himself part of Ryan Murphy's regularly revisited coterie of actors.

Not a whole lot is known about Dr. Brock Holt, but one key fact is right up to par with Scream Queens' penchant for totally looney twists. Dr. Holt is the first person to receive a successful hand transplant, and that hand could have previously belonged to a genius – or someone less appealing. As executive producer Ian Brennan explained, "[He] may have the hand of a brilliant surgeon, or [he] may have one from a squash player who killed his opponents." Odds are that there will be plenty of gags surrounding his hard to control transplant hand.

Romance will also play a part in Stamos' arc on the show, which comes as no surprise considering the dreamy image he's been cultivating since his days as Uncle Jesse. Stamos told E! that the show will feature some romance right away, and one promo does show Stamos' doctor on what appears to be a movie date with Emma Roberts' Chanel Oberlin. (Am I the only one hoping he ends up Dean Munsch's love interest instead? Jamie Less Curtis would be more age appropriate for him, and I bet they'd have hilarious chemistry.)

There are sure to be all kind of strange, hilarious, and horrifying moments in store for the upcoming season. With those alleged secrets in Dr. Holt's past (and the whole disembodied hand thing), it seems like a guarantee that there's more going on with Dr. Holt than his handsome facade would have people believe.