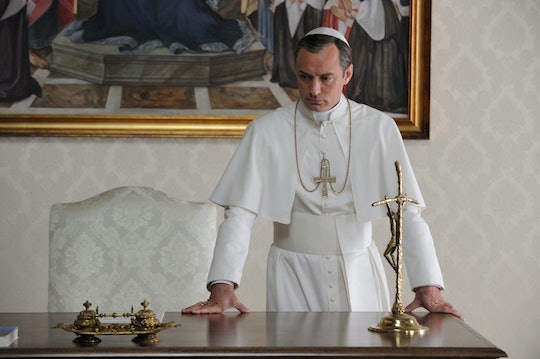 Jude Law Is Taking On A Very Holy Role

HBO is known for their provocative programming and their new show about a conniving pope that premieres this weekend is no different. In The Young Pope, Jude Law plays Pope Pius XIII, a young American pope, who, although he's young, is definitely not cool. Pius XIII is fictional pope who is believed to be a saint, but he's very traditional. He's kind of Machiavellian as he directs the Church in a more conservative direction and doesn't follow traditional Vatican protocol — so expect lots of politicking and backstabbing.

The miniseries was shot mostly in Rome, but not in the Vatican, and has already been aired in Italy, France, and the United Kingdom, so Americans are the last ones to see how good Law is at portraying a homophobic pope. It's going to be hard to hate him since he's so darn attractive, let's face it. The series was directed by Paolo Sorrentino, who won an Oscar for his 2013 film, The Great Beauty, and reportedly takes an in-depth look into loneliness and power. Diane Keaton plays Sister Mary, a nun who raised Law's character, who was orphaned, and believes that he is an actual saint. Apparently, Law's character does, too, which is why he basically does whatever he wants.

Law told CBS This Morning that he thinks the character is complex. "He has issues. I think — I hope that as the show unravels, he becomes lovable. He’s certainly intriguing," Law said, while adding:

I always felt that on the one hand, I’m playing Lenny Belardo [the pope's American name], the orphan who is trying to come to terms with his sense of never being loved, and on the other hand, he’s Pope Pius XIII and how he then channels those issues into leading the Catholic faithful.

Law also remarked that he thought playing the character was "wonderful," although a little rough at first. “Where do you start working or researching how to play a pope? And Paolo, the wonderful director, Paolo Sorrentino, pointed me always back to playing the man, Lenny Belardo," he said.

He sort of is. He wants to ban gay priests from being ordained, as well as prosecuting all the cases of sex abuse. He tells visitors that he knows how attractive he is. Law's pope drinks Cherry Coke Zero for breakfast, smokes, has a little New York accent, and won't let Vatican marketers put his face on merchandise (which, anyone who's been to the Vatican knows) is sort of the best thing about the Vatican — pope bottle openers and key chains are rare, if a little sacrilegious.

A show about a power hungry, conservative, self-loving pope might be just what America needs post-inauguration. He sounds a little familiar, right?