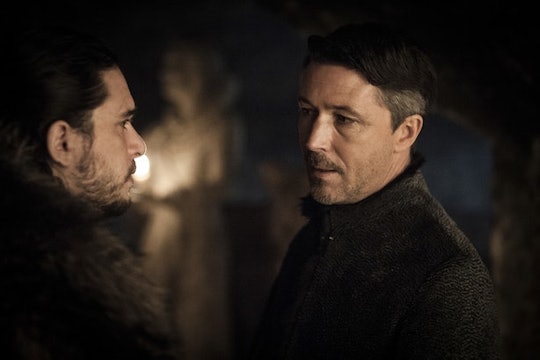 Once you've recovered from the final ten minutes of Game of Thrones' latest episode "The Spoils of War," you may remember a good bit of back and forth about a dagger, clearly indicating that it's going to be important in upcoming episodes. The real question is who does Littlefinger's dagger belong to on Game of Thrones? The original owner of this particular weapon could prove to be important in the coming action.

This dagger hasn't really been seen since the first season. A "catspaw" — meaning someone hired to do someone else's dirty work — was hired to assassinate Bran using this very dagger. Determined to find out who had it in for her son, Catelyn took the dagger to King's Landing where Littlefinger admitted it was his at one point, but that he'd lost it in a bet to Tyrion Lannister. Ned Stark then kept the dagger, but Littlefinger took it back after betraying him. All of this business with the dagger arguably sparked the discord between the Starks and Lannisters, launching the War of the Five Kings. Six seasons later, Littlefinger has now reintroduced the special knife, but still no one knows who it really belonged to or who tried to have Bran assassinated.

Littlefinger tried giving Bran the dagger as a sort of gift, because it was once used to try and kill him. Bran, of course, responded in his new emo way, while repeating one of Littlefinger's creepier philosophies back to him: "Chaos is a ladder." With this small phrase, Bran shows Littlefinger that he knows he likes to profit from turmoil, and is not above creating it just to benefit himself. If it turns out to have been Littlefinger who tried to assassinate Bran in order to stir up trouble (kind of like how he poisoned Jon Arryn which sent Ned Stark south with Robert Baratheon), I would not be surprised. Sansa is worried too, telling Bran that Littlefinger "isn't a generous man" and if he gave that to him, there's a reason.

Other Game of Thrones theorists have other hypotheses about who the dagger's real owner is. In the books, Tyrion believes it was Joffrey who ordered the assassination in some sort of bizarre attempt to impress Robert. Although the show hasn't been much interested in Joffrey since his death, so this is probably the not the case. Then there's the materials of the dagger itself to consider. It's Valyrian steel (able to kill White Walkers, by the way) with a dragonbone handle. Episode 1 saw Sam Tarly looking at a book with a very similar-looking dagger, supposedly decorated with dragonglass, indicating that it must have belonged to someone quite wealthy. Could the dagger be a relic of Rhaegar Targaryen's, making its rightful owner none other than our very own broody-faced hunk Jon Snow?

Whoever the dagger once belonged to, it's Arya's now. And judging by how well she used it to hold her own in a sparring match with Brienne, it doesn't look like she'll be giving it up any time soon. Perhaps she'll be the one to kill the Night King with this weapon in hand. Maybe it'll end up amounting to nothing all that important. But considering the show we're dealing with, I very much doubt that will be the case.