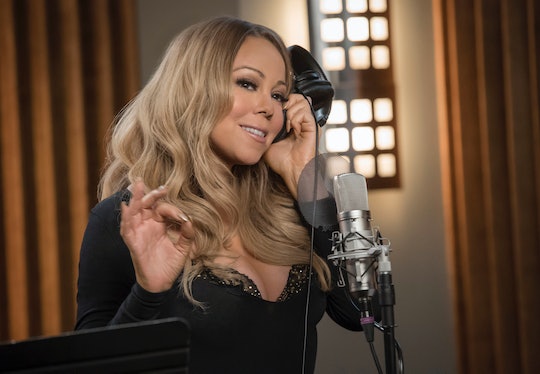 Who Does Mariah Carey Play On 'Empire'? She May Help Jamal Find His Voice

Empire is back in full swing for Season 3: we're only two episodes in and already there's been a murder, a birth, and a love interest for Cookie. But with the third episode, titled "What Remains Is Bestial," comes Mariah Carey's guest spot. Showrunner Ilene Chaiken admitted that Empire would be moving away from its showstopping guest stars this season to focus the storyline more on the Lyon family dynamics. Carey, however, had been in talks to join the show for years and they finally found a role that worked. So who does Mariah play on Empire? Surprisingly, she won't be playing herself!

But only insofar as she's playing a "fictional character" named "Kitty" (not to be confused with Boo Boo) who casually records new music in a session filled with studio heads while wearing a blingy leotard. So it seems as though she may be, shall we say, heavily inspired by Mariah? For now, Kitty is only slotted for a one-episode appearance, with a possible return in the second half of the season. But she comes in as a mega superstar to record an "explosive" track with Jamal for his new album. He's been skittish about singing since his shooting, thanks to some apparent damage to his vocal cords from being intubated? Every time the spotlight is on him, he suffers a panic attack, and Lucious doesn't seem too up to snuff on how triggers work. But enter: Kitty!

According to the episode synopsis, "When the duet encounters obstacles, Kitty helps Jamal dig deep to overcome personal difficulties and reach a musical breakthrough." So it seems like Jamal may finally work up the courage to start recovering from his vocal injury and we'll actually have new Jussie Smollett tracks to look forward to this season. But there's one other interesting moment in the sneak peek Carey tweeted above: was that a tiny little flirt between Kitty and Andre?

The eldest Lyon brother is very freshly widowed, so it would perhaps be a little tacky for Kitty to full-blown hit on him. (Though how much more full blown do things get when you're flirting in a leotard?) But she seems to go about it very, very gently, and since we know she only sticks around for this episode, it seems unlikely that the two will have a serious encounter. It's nice to see that a potential love interest for Andre hasn't been forgotten, though.