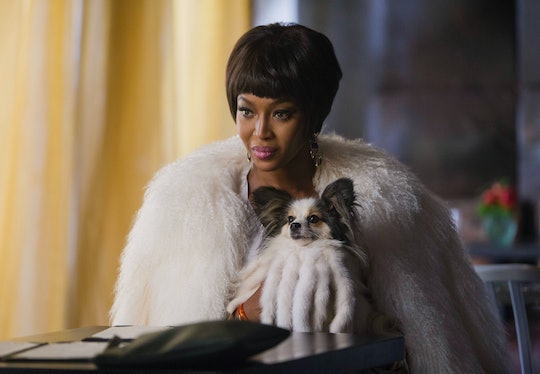 Naomi Campbell Is About To Make Her 'Star' Debut

Lee Daniel's newest musical drama, Star, will return on Jan. 4 with it's second episode and fans are already hooked. In the premiere episode, fans were introduced to newcomers Jude Demorest, Brittany O'Grady, and Ryan Destiny, who play Star, Simone, and Alexandra, respectively. The three ladies are attempting to start their own girl group in Atlanta while Star and Simone's godmother, Carlotta Brown, (played by Queen Latifah) looks out for them. But while the first episode was all about introducing the ladies, the second episode will bring in some familiar faces, including Tyrese Gibson and Naomi Campbell. So who will Naomi Campbell play on Star? She'll be filling the role of Alex's mom, Rose Crane.

Campbell is most well-known for being a supermodel, but she's also had multiple acting gigs since the '80s. She's appeared in The Cosby Show, The Fresh Prince of Bel-Air, New York Undercover, and American Horror Story. However, fans of Star will probably most recognize Campbell from her former recurring role on Empire as Camilla Marks, the older woman that Hakeem fell in love with before Lucious got in the way.

It's unclear how long Campbell will appear on Star, but it's obvious Daniels likes working with her so it'd be surprising if she doesn't stick around for at least more than one episode. Campbell will be working alongside Lenny Kravitz, who plays Alex's father, Roland Crane, a big star in his own right.

Based on the preview for the first season, it looks like Rose will butt heads with Star in the upcoming episode. "You have bad roots, you insolent hussy," Rose says to someone, presumably Star, in the Jan. 4 preview.

It looks like Rose isn't all that happy with her daughter's choice of friends. Rose is clearly rich, though whether it's just from Roland's stardom or her own money remains to be seen. However, there's no doubt she won't like the fact that Star and Simone grew up in foster care and are the complete opposite of wealthy. Nor will she like that Alex is now working with them, I'm sure.

Could Rose get in the way of this girl group before they really get their feet off the ground? Tune in to Star on FOX on Wednesday, Jan. 4 at 9 p.m. ET to find out how it all goes down.