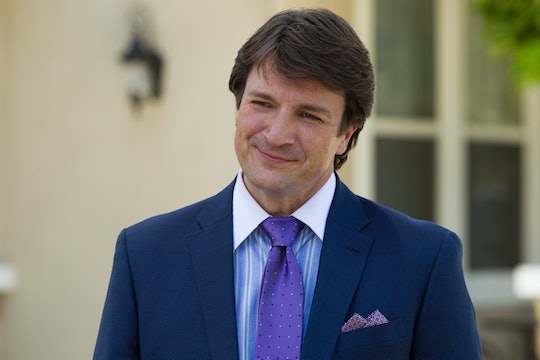 Nathan Fillion Is Part Of A New TV Project

Since the end of Castle last year, fans have been looking for their new Nathan Fillion fix. Well, look no further Castle fans. The actor has snagged a role on the new Netflix series Santa Clarita Diet, starring Drew Barrymore. So who does Nathan Fillion play on Santa Clarita Diet? That's an excellent question, but there's unfortunately no clear answer just yet. The new series follows the lives of the Hammond family. Barrymore plays the mother, Sheila, who becomes suddenly undead and needs to eat humans to survive. Her husband Joel (played by Timothy Olyphant) and her daughter Abby (played by Liv Hewson) attempt to keep Sheila's need for human flesh in check, which is of course easier said than done. (You know, typical family dilemma type of stuff.)

Based on the trailer, it looks like Fillion may be a nosy neighbor that questions what the Hammonds are up to. In the clip, he's seen speaking to Joel about the insane amount of... something that Sheila throws up. While this conversation thoroughly grossed me out, it also made me feel like Fillion's character may not last long on the show. Nosy neighbors always either end up joining in on the secret or find themselves taken out of the picture completely. Based on his character's insistence that something was wrong with Sheila, the Hammonds may have to get rid of him... for good.

According to IMDb, Fillion is only on one episode of the first season, however, it also says Barrymore is only on for three episodes, which is obviously not true since there's 10 episodes in the first season and she's the star. Still, I don't see Fillion sticking around too long, especially since the premise of the show is the family killing people so Sheila has food to eat. Granted, they're only supposed to kill bad people, but accidents happen and Fillion's character may be evil for all I know.

But whether he's on the show for one episode or for the entirety of the season, it's always good to see Fillion back on the small screen where he belongs. (Seriously, this is giving me all kinds of Castle withdrawal here.) So make sure to check out the new show and see what his character is like.

Santa Clarita Diet will be available for streaming on Netflix beginning on Friday, Feb. 3.