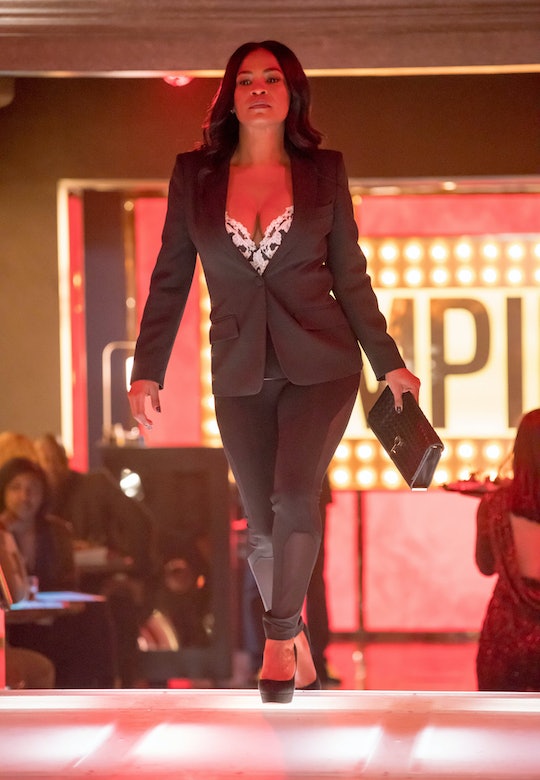 Nia Long Comes In With A Bang On 'Empire'

If Empire's known for anything, it's for its rotating cast of A-list guest stars. Okay, it's also known for its Shakespearian drama and original songs, but each season we're amazed at the line-up of characters the show has in store. Towards the end of Wednesday's episode, "Play On," actress Nia Long entered the fray. You may remember Long from Boyz n the Hood and Fresh Prince of Bel-Air, and now she's gracing Empire Records with her presence. Who does Nia Long play on Empire? Her character sure left us with a lot of questions.

As of now we don't know much about Long's character, but we do know she's not playing around. She appeared in the final scene of the episode, when Andre and Shyne Johnson meet with one of Johnson's sketchy partners for his Vegas deal. Long plays the partner's wife, Giuliana. The partner begins abusing and insulting her, to which Andre expresses that's he's not cool with that. As the partner goes off on a tirade, Giuliana takes the opportunity to shoot her husband dead – yes. In the three minutes she has been on screen, Giuliana has already killed someone. This can only be telling as to what's to come next.

After Giuliana shoots her husband, one of his cronies tries to then kill her — but Shyne intervenes. We know Giuliana is certainly not going away, and we're getting a sense as to what she's capable of. According to E! News, she is a Las Vegas night club owner who will no doubt cause trouble with the Lyon family – especially Andre (and perhaps his plot to kill Lucious?) Fans on social media, though, were especially excited to see what will occur between Giuliana and Cookie:

This could be because there was supposed real-life beef between Nia Long and Taraji P. Henson. TMZ reported that the two actresses were "at war" on set, but Empire showrunner Ilene Chaiken dismissed the rumor this week. In a statement printed by the Chicago Tribune, Chaiken said, "Nia is a gifted actress and we're grateful for the incredible work she did on Empire in this pivotal role. Her character, Giuliana, is a nemesis for Cookie, and the stories in the press would appear to be conflating that fiction with reality. We can't wait for the fans to enjoy her spectacular turn on the show. It's pure Empire drama."

Well then, that's settled. I can't wait to see the fictional drama between Giuliana and Cookie unfold in the weeks to come.