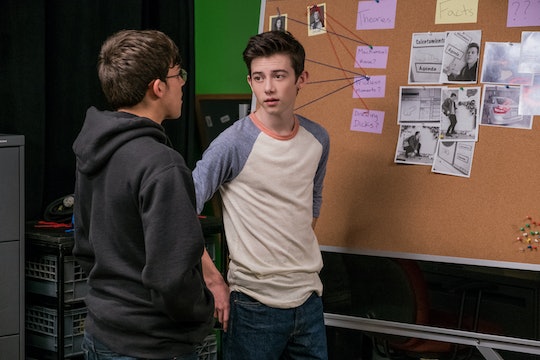 Uncovering The Truth About The Graffiti On 'American Vandal'

Netflix's most... unusual new series is a so-silly-it's-brilliant satire of true crime documentaries in the vein of Making a Murderer, The Jinx, and Serial. American Vandal is an eight-episode half-hour "comedy" styled after the super dramatic, suspenseful, and conspiracy-obsessed true crime stories that have exploded in recent years. Peter Maldonado, a high school student at Hanover High School in Oceanside, California, embarks upon trying to figure out who vandalized teachers' cars with spray-painted male genitalia. Resident burnout Dylan Maxwell has been accused of the crime, but who drew the graffiti on American Vandal? It's the crime of the century (OK, not really; it's a mind-numbingly inane premise, but the series nails the genre so well that it's weirdly genius). Warning: Season 1 spoilers ahead!

It all starts when, during a school admin day (i.e., the kids were off school while the teachers assembled), between 2:00 p.m. and 2:30 p.m., someone spray-painted 27 phallic images on 27 teachers' cars in the school faculty parking lot. To make matters more conspiratorial, someone also broke into the school's media room, which housed the school's servers, and erased the parking lot security footage from the time period in question. Hanover High's beloved Spanish teacher Ms. Shapiro also claimed that her tire was slashed.

Dylan, a "known dick-drawer," was fingered early on for the deed. He had motive: a long-standing feud with Ms. Shapiro. He had access: he was a cameraman for the school's morning show, meaning he had keys to the media room. He had a weak alibi: conflicting testimonies from different friends who claimed to be with him. And his favorite activities were 1.) uploading dumb prank videos to his YouTube channel, and 2.) terrorizing teachers by drawing penises on their whiteboards every day. There was also a witness, honor student Alex Trimboli, who claimed to have seen Dylan do it.

Ultimately, this was enough evidence for the school board to expel Dylan for the act, and seek criminal charges of felony vandalism. (Over $100,000 worth of damage was incurred — 27 inappropriate images on 27 cars is a lot of paint jobs.) Over the course of eight episodes, Peter seeks to uncover the truth: did Dylan really do it? It turns out all the evidence against him was not as it seemed.

Peter systematically dismantles all the evidence against Dylan, including eventually discovering video footage that places him elsewhere at the time of the crime. (One of the series' triumphs is nailing the way high school students have video/photo evidence of pretty much every second of their lives due to social media — it's a fascinating study in the way high schoolers engage with Snapchat, Twitch, Instagram, and other platforms.)

So, as American Vandal's in-story viral hashtag asks: #whodrewthedicks? The question is never definitively answered (told you it was good satire!), even though Dylan is officially exonerated. The best answer fans get is a heavily implied culprit, or, as it turns out, two culprits. By the end of the series, Peter feels pretty confident that Christa Carlyle, student body president and the school's most "annoying" activist (constantly staging protests and demonstrations, she's kind of like Hermione Granger at her most social justice riled) and her boyfriend were responsible for the crime.

But why would Christa jeopardize her bright future by committing a felony? She's the epitome of a passionate political activist who knows that sometimes you have to operate outside the rules to inspire change. In the last two episodes, we're taken into a subplot involving how Christa tried out for the football team and was humiliated. Most people assumed she was doing it to advocate for gender equality on the football team. But she was actually an all-state soccer player and really wanted to be the team's kicker. The football coach, who had an ax to grind because Christa is constantly critiquing the school's emphasis on football, shadily puts her in a tackling drill at try-outs, even though she's only trying out for kicker. Christa, a tiny teenage girl, goes flying across the field when a huge male student unnecessarily tackles her with full force.

In an Instagram video of the incident, we see Coach Rafferty walk over to Christa after she's been hit and whisper something. We also know a complaint was filed against Rafferty for "inappropriate conduct with a student" on that same day, and the investigation closed five days before the vandalizing incident. The next day, he's awarded the school's Teacher of the Year Award.

Although viewers never get a confession from Christa herself, it's implied that Rafferty sexually harassed, or possibly even assaulted her, and she went on the vandalizing rampage with the help of her boyfriend — who conveniently provided her alibi — because the school refused to do anything about it. Peter surmises that her boyfriend spray-painted the images on the teachers' cars while Christa, who suffered from a broken foot at the time, erased the security footage. (She was also a member of the morning show with access to the media room.)

Christa refuses to be interviewed about these discoveries until after graduation, but she still doesn't corroborate any it, knowing the consequences if anyone pursued her as a suspect. However, she's clearly shaken by the mention of Rafferty, eventually conceding, "What do you want me to say? He's an asshole."

It's an unexpectedly empowering story with a badass female antihero, and although Peter's documentary wades into unnecessarily humiliating female students from time to time, even those moments get called out by the victims. Ultimately, the slut-shamed come out on top and the boys learn some painful lessons in how to shape narratives about women.