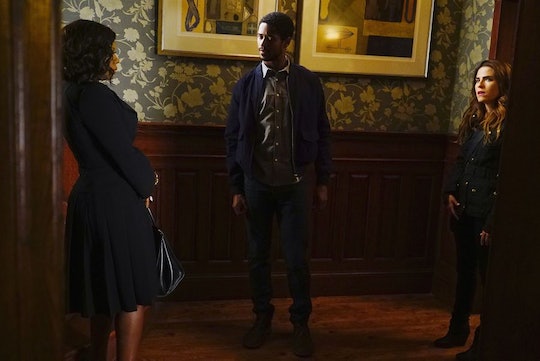 Who Else Was In Annalise's House On 'How to Get Away With Murder'? It Could Be Anyone

The Season 3 premiere of How to Get Away with Murder let us know that in six weeks time someone will die but naturally they haven't told us who. Instead each week we'll find out who doesn't die and then finally it will be revealed who does. However, in another twist, it was revealed that there was actually someone else in Annalise's house when it was burned to the ground, which seemed to surprise Bonnie and Oliver, the only two people besides Annalise that we know definitely survive the fire. So who else was in Annalise's house and how will this affect whatever it is Annalise is planning?

Although at first it seemed Annalise was genuinely upset by whoever was found dead in her house with each passing episode it seems more likely that this was all a plot by Annalise to kill someone without getting her hands dirty. The fact that she had Oliver wipe her phone of all it's data and then Bonnie had him plant it back on the scene makes it clear there's something bigger going on. Bonnie didn't even seemed fazed when she arrived at the scene of the fire. What did throw her, however, was the reveal of another body, which makes it clear that wasn't part of the plan. Most likely whoever's in the house wasn't supposed to be and there's a lot of possibilities for who that could be.

Any one of the Keating Five could've been in the house; they all practically live there. However, it's Wes that Annalise invited to actually move in with her so he's the most obvious choice here. He could've stopped by the house to offer Annalise another pizza or just to say hello. Either way it wouldn't be all that surprising if Wes dropped by the house and Annalise had no idea he was coming. Another likely possibility is Nate who pretty much lives with Annalise now. It wouldn't be all that surprising if Nate has his own key, let himself into the house, and got caught in the crosshairs of Annalise's plan.

One other possibility is Frank. Frank has been MIA since the start of the season but thanks to Laurel's dad Laurel now knows where he is. However, rather than tell Annalise and Bonnie, Laurel lied and said she couldn't get the information from her father. There's no doubt that Laurel will try to find Frank before this fire goes down and once she does all hell will probably break lose. Frank and Annalise are obviously on the outs and Frank could've been the target of the fire, if Annalise was in fact the one behind it, or Frank could've been at the house for his own agenda and just stumbled into the fire.

At this point anything is possible and it could be anyone under the sheet or in the house. We'll just have to keep track of who we know is definitely alive before we can really predict what exactly happens in six weeks. Make sure you're taking notes.