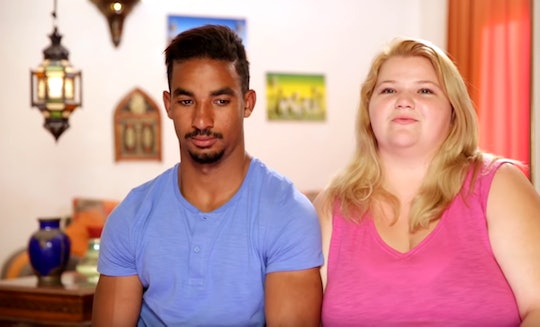 Nicole's Family Is Concerned About Azan On '90 Day Fiance Happily Ever After'?

On last week’s episode of 90 Day Fiancé: Happily Ever After?, Nicole was once again disappointed by Azan, and her family again tried to warn her to be wary of his intentions. In a sneak peek for the upcoming episode, her stepdad Joe tells her that he got an email from someone in Morocco claiming to know that Azan is just scamming her. So who is this mystery person? Who emailed Nicole’s stepfather about Azan?

From the clip, it’s unclear who this person is, but the person does manage to convince Joe that Azan is definitely up to no good. “It’s a Morrocan who knows exactly what’s going on over there with Azan,” Joe says of the mystery emailer. Nicole is completely unconvinced of this person’s credibility, and she walks out of the room in anger, saying she didn’t want to talk about “something stupid like this.” Joe then reveals a few tidbits about the email. “A Moroccan emailed me,” he says. “Says Azan is just stringing Nicole on.”

In the email, which is shown on screen, the mystery person claims that Azan isn’t planning on getting married to Nicole. “Joe, I know people that know Azan,” read the email. “He isn’t going to marry Nicole. He said his sister and mother do not approve of Nicole — There is no store — [redacted] and asked are ‘all American girls this stupid?’”

On the last episode, Nicole was preparing to go on a trip to Grenada where she was supposed to meet up with Azan. But just a day before she was supposed to fly out, Azan told her he had to cancel because of a family emergency. “I’m not completely upset that we’re not going tomorrow, I’m disappointed,” Nicole told producers hen asked how she felt about being stood up by Azan once again. “I would love to see Azan, but when we become husband and wife, nothing will stop us from taking care of each other.”

I don’t know what the real deal is with Azan, but something seems fishy, as much as Nicole wants to deny it. Her mom, however, is super hip to his game, and she continues to try and convince Nicole to see the bigger picture. When Nicole told her mom about Azan cancelling the Grenada trip, her mom took that as yet another red flag. “Nicole really wanted this trip to Grenada, and everything just kind of fell apart, just like the wedding,” she says in the episode. “I don’t know what actually came up with his family emergency but it doesn’t seem plausible to me. My fear is that Azan really doesn’t want to be with her.”

I have a feeling that the email did nothing to sway Nicole away from Azan, because just as recently as May 15, she posted a picture of him on Instagram with the caption “My man crush everyday.” In another post from last month, Nicole shared a picture of Azan sleeping while on a video call with her. “Being so far away is hard on us so being able to skype and sleep together makes me happy,” she captioned the post. “So soon we’ll be by each other’s side again.”

Hopefully, as the season progresses, fans will get to see who actually emailed Joe, and if that person is really telling the truth about Azan.