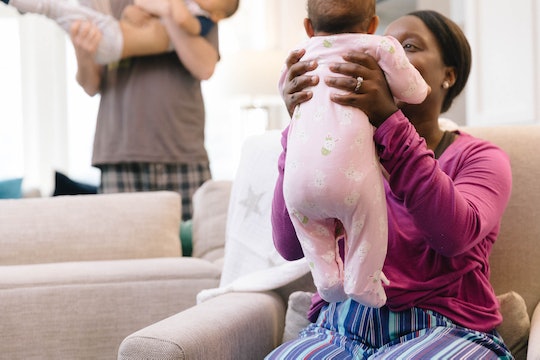 Here's How Child Custody Works If The Parents Aren't Married

Parenting is complicated — there's no doubt about that. But things can get especially sticky when two people make a baby (or a few) and then discover that they don't want to be together anymore. This can be heartbreaking for a number of reasons, including the fact that the two of you have children who are leaning on you to make some pretty serious decisions. When you're married, the rules about custody are pretty cut and dry according to your state, but who gets custody if the parents aren't married?

Chloe Wolman, a divorce and custody attorney at Davies Wegner Law in Los Angeles, California, tells Romper that each state has their own rules for handling child custody. "Ostensibly, in California [where I practice], custody in cases where the parents were never married is the same as custody for parents who were married," she explains. "While that's true on a broader level, custody for unmarried parents can be complicated for logistical reasons."

For instance, Wolman says courts in California often look to the history of the case for cues on how to move forward. "When the parents are married and living together, both parents likely have an established history of giving the child baths, changing diapers, feeding the child, helping with homework, and so on. If the parents are not married — and in particular, if they never lived together — establishing that history in court is often more challenging."

Wolman explains that, for example, the parent not living with the child may have to establish that they have childproofed their house or show that they have an appropriate place for the child to sleep. "In some cases, a parent really has to start from zero," she says.

Other examples include a situation where the parties dated and the mother became pregnant, but did not share that information with the father. "The father only finds out months — or even years — after the child is born," Wolman says. "In those cases, the courts will often give dad only a few hours a week with the child to begin with."

While that situation might include a "step up" plan where the father will earn more time with the child, both parents and child will need time to adjust to each other and the new setup, Wolman says. "This is rarely the case with custody for children of married couples," she adds. "With married couples, even if one parent is more detached, that parent has at least spent time in the home with the child and they aren't strangers to one another."

The complicated ins and outs mean it's important to work with an experienced family law attorney, especially when unmarried parents are unable to reach an agreement regarding child custody, visitation, and support, noted Infinity Law Group in Massachusetts. Plus, it's the best way to ensure an arrangement that most benefits your child. Which is essentially the most important topic of this difficult conversation, right?