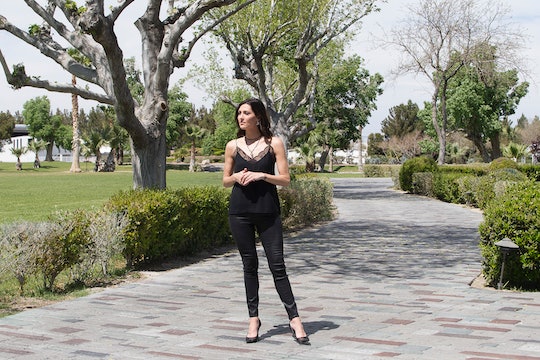 The Infamous 2-On-1 Date Is Here

It was bound to happen sometime: the dreaded 2-on-1 Bachelorette date. It's infamous for a reason: one stays, one goes. Who gets eliminated on Becca's 2-on-1 date on The Bachelorette? Viewers may have a clue, but the blow-up will still be one to watch.

Honestly, I'd say this 2-on-1 has been brewing since the premiere. This date, in which one two suitors go on a date with one lead, is infamous among Bachelor enthusiasts and scholars. Because of their escalating tension, most viewers could have predicted that the 2-on-1 would be between David and Jordan as shown in the previews. Jordan basically set himself up to be the villain with his boasting and tendency to get attention by dancing around in his underwear. And David ended up being the guy most willing to call him on it.

Once Jordan mentioned Tinder in a group date, though, the seeds of the elimination date were planted. To recap: Jordan said that Tinder sent him a notification that he received over 4,000 matches in 2017, and that he had a 100 percent match rate. This makes no sense on multiple levels: how is it possible to have that many matches? Does Tinder really "congratulate" their users about this? Does Tinder also let people know if they have a high match rate?

This confused me, but annoyed the other contestants. David seemed to be the most annoyed, so he went to Becca about Jordan. This caused a fight between the two which was interrupted by the fact that David fell out of his bed and had to go to the hospital. But fear not, because once David came back from the hospital, their enmity resumed. Jordan made fun of David for having a broken nose (seriously) and doubted that Becca would give him a rose. Well, Jordan must not know how The Bachelorette works, because she did just that.

In fact, Becca gave David a rose before the rose ceremony so he could go get some rest. At the rose ceremony itself, Jordan got the last rose of the bunch, so he knew something was up. This was all leading up to a 2-on-1 date in Las Vegas — but who will be the victor?

I can't tell you for sure who the winner is, but if you imagine that Jordan is definitely going home because he's the designated villain, I wouldn't be too sure. After all, David is the one who showed up to the premier in a chicken suit — though he became so much more than that chicken suit in the following weeks. Usually the gimmick-happy contestants end up as jokes and are eliminated quickly at the end of a rose ceremony, but not David.

However, he has committed the cardinal Bachelor universe sin — telling on a fellow contestant. Contestants always seem to think that their chances will be better if they tell the lead about all the shadiness another contestant is up to but it never works out in their favor.

But what about Jordan, though? Well, it's not likely that Jordan lasts much longer either. Another common theme in this show is that the designated "villain" usually leaves at around the midway point in the season. And Jordan could definitely be considered a "joke" contestant. Like Chad Johnson from JoJo Fletcher's season, Jordan is a cartoonish villain that is fun to watch for a few episodes, but gets old fast.

After Arie, Becca wants the choice she makes to be the right one, and David and Jordan clearly are not it (at least from my perspective). While nothing has been announced, I hope the two of them go on Bachelor in Paradise this season. No matter what, though, their Instagram accounts will be there for me to creep on in perpetuity — whether they continue appearing on The Bachelor franchises or not.